Japan faces most crucial earnings season in a decade

Japan is gearing up for its most important reporting season in over a decade, with investors closely watching for signs of whether Prime Minister Shinzo Abe's radical policies to kickstart the economy, also known as 'Abenomics,' is filtering through the nation's corporate sector that has been marred by sluggish domestic demand in the recent years.

Key industry bellwethers including Toyota, Honda, Sony and Panasonic, are due to report their earnings for the April to June quarter this week. And what will be key, say analysts, is whether rising profits are being driven by more than just a favorable exchange rate.

"If people see most of the earnings are coming down to a weaker yen and overseas demand, it may suggest domestic consumption isn't as strong," said Evan Lucas, market strategist at IG Markets.

"On the other hand, if we see macro policies boosting demand on the domestic front, we can finally believe that Abenomics is filtering through to where it needs to go," he said.

"One of the hardest hit by Japan's lost decade of deflation domestically, Sony, has also had to battle the likes of Apple and Samsung for market share internationally in portable music, smartphones, computing - it has finished last almost every time. Will this Thursday's results see it finally breaking out of this spiral? Estimates suggest they will," he said. 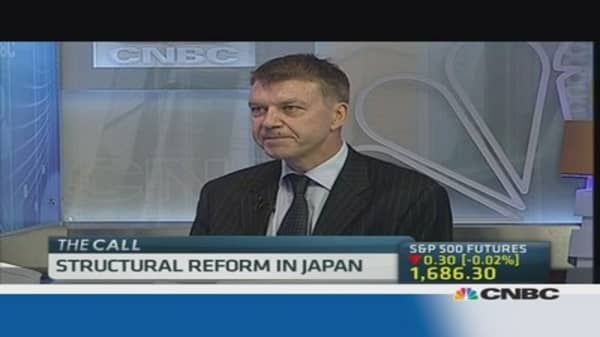 Sony is forecast to report an operating profit of 65 billion yen ($665 million) for the April-June quarter, according to Citi estimates, compared with 6.28 billion yen in the same period a year earlier.

The earnings season will be important for determining the direction of the benchmark Nikkei 225 - which is up 33 percent year to date, said strategists.

(Read more: Here's when to get out of the Nikkei rally)

He cited the performance of Fast Retailing shares, which dropped around 6 percent a day after the company's quarterly earnings report released on July 11, which was largely in line with expectations. For example, the operator of the Uniqlo brand estimated its full year operating profit would be 147.5 billion yen, in line with an average of 149.7 billion yen expected by 19 analysts surveyed by Reuters.

Sean Darby, chief global equity strategist, however, said with many Japanese corporates basing their own earnings projections on dollar-yen exchange rate of around 91, there is room for upward surprises.

For example, in May, Toyota Motor said it expected to post net profit of around 1.37 trillion yen for the year ended March 2014 from 962 billion in the previous year. This forecast was based on an exchange rate of 90 yen to the dollar, much stronger than where the currency is currently trading at 97.75.

Toyota is expected to post an 80 percent year-on-year rise in operating profit to 635.6 billion yen over the April-June period, according to Nomura estimates.