US acquirers cut taxes by relocating to Europe after mergers 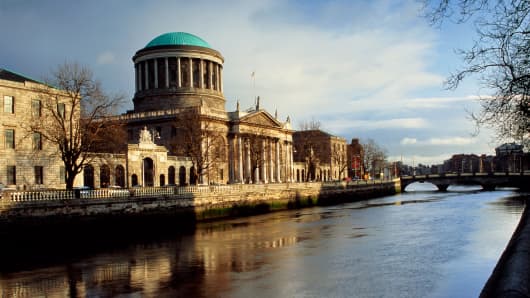 A growing number of US companies are set to save hundreds of millions of dollars in tax by relocating to Europe after completing takeovers on the continent.

Some of the biggest mergers and acquisitions so far in 2013 have involved so-called "tax inversions" – where a US acquirer shifts overseas, to Europe in particular, to pay a lower rate. These deals have come at a time when politicians in Washington have been increasing their calls for corporate tax reform.

Michigan-based pharmaceuticals group Perrigo has said its acquisition of Irish biotech company Elan will lead to re-domiciling in Ireland, where it has given guidance it expects to pay about 17 per cent in tax, rather than an estimated 30 per cent rate it was paying in the US. Deutsche Bank estimates Perrigo will achieve tax savings of $118m a year as a result.

Another pharmaceuticals takeover – New Jersey-based Actavis's acquisition of Warner Chilcott in May – will also result in a move to Ireland, where Actavis's tax rate will fall to about 17 per cent from an effective rate of 28 per cent tax, and enable it to save an estimated $150m over the next two years.

Similarly, US advertising company Omnicom has said its $35bn merger with Publicis will result in the combined group's headquarters being located in the Netherlands, saving about $80m in US tax a year.

Meanwhile, Liberty Global's $23bn acquisition of Virgin Media will allow the US cable group to relocate to the UK, and pay its lower 21 per cent tax rate of corporation tax.

Many US acquirers of European companies have not disclosed their exact tax savings.

While tax saving has not been the main driver of these deals, or planned relocations, M&A advisers say the number of companies seeking to re-domicile outside the US after a takeover is rising.

"We have seen an increasing number of US inversions in the last couple of years, first on a standalone basis and, more recently, as part of M&A deals," said Mark Kingstone, a tax partner at law firm Linklaters. "As cross-border M&A activity increases, this trend may continue."

Increased use of tax inversion has coincided with an intensifying political debate on US tax – with Democrats, Republicans and the White House agreeing that the current code, which imposes a top rate of 35 per cent but offers a plethora of tax breaks, is in need of reform.

Frank Aquila, of law firm Sullivan & Cromwell, said: "The interest in tax inversion transactions has clearly increased as US companies have come to recognize that it is unlikely that Congress and the President [will] fix the problem any time in the near future."