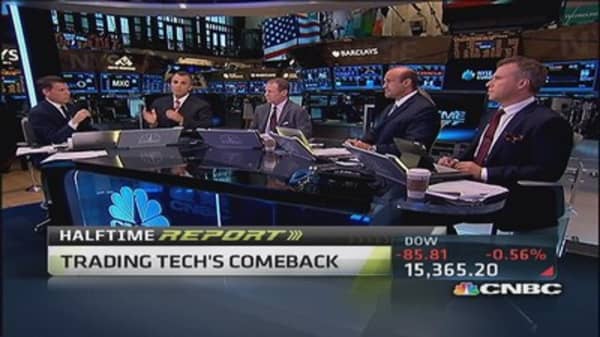 A new paradigm in technology, as well as in Apple, makes the sector a solid play, Joe Terranova of Virtus Investment Partners said Wednesday.

"I'm not selling out because we have this new dynamic now of, technology wants to come along and play," he said, adding that the sector had experienced an "unexpected appreciation."

Apple is expected to unveil new products in mid-September.

Terranova also said he was positive on Cisco, which he expected to raise guidance, beat earnings expectations and continue to take market share.

"I think the story is exactly as if it's always been," OptionMonster's Pete Najarian said, adding that stock picking was especially important.

"When you're talking about Apple or Facebook, you are talking about where everybody has been targeting for quite some time," he added, noting that Apple stock had been clawing its way back from its sub-$400 levels even before a pop on news that billionaire investor Carl Icahn had announced his stake.

"Without Carl Icahn, the stock was $475, so let's not suddenly say that Icahn's the only reason this stock is near $500," Najarian said. "He's given it that last little boost toward $500, but let's be honest, this has been a stock that's already been on the move."