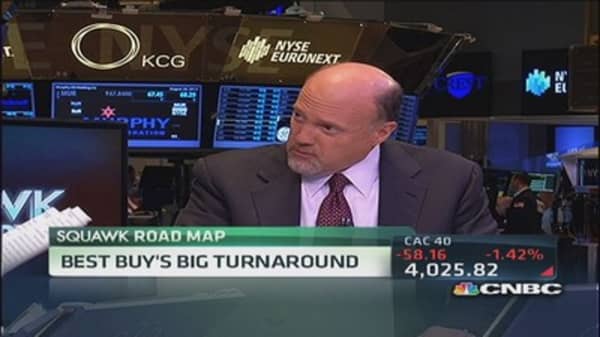 Although it has been almost all bad news for retailers this summer, several names stand out from the pack and are set to go higher, CNBC's Jim Cramer said Tuesday. He pointed to four stocks that are either "firing on all cylinders" or rebounding strongly off weakness in 2013.

"This is a remarkable turn," Cramer said on "Squawk on the Street". CEO Hubert Joly "has gotten it right," Cramer added, likening him to a new NFL coach who has brought his team to the playoffs after a disappointing season.

Cramer sees Best Buy's strength in its online retail strategy, which is allowing the company to better compete with Amazon, an expectation of solid video game sales through 2013 and the increased willingness of the millenial generation to shop in stores.

"I was too critical," Cramer said. "The strategic plan is over, now it's just about tactics. The tactics are working." He said that the stock, which was once virtually left for dead, has already made a critical move higher, which signals that the company has identified its problems and is in the midst of fixing them. From here, this represents another move higher, he said.

Best Buy reported its first quarterly profit in a year on Tuesday, saying that net earnings had risen to $266 million, or 77 cents a share in the second quarter ended Aug. 4 from $12 million, or 4 cents a share, a year earlier. 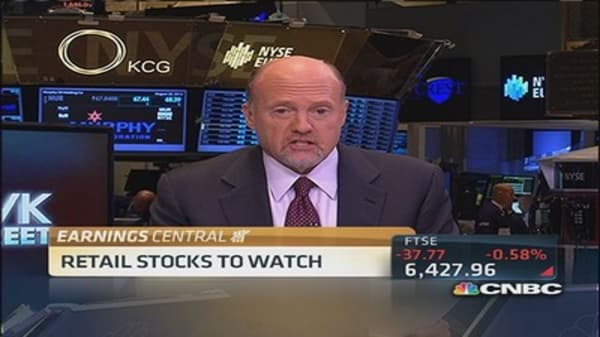 "Bill Ackman should apologize immediately to what he said because [JCP CEO] Mike Ullman is delivering," Cramer said on "Squawk Box." Cramer likes the company's $1.5 billion current cash position, optimism for the critical back-to-school season, the return of "'couponing'" and private label offerings.

"This is a very good quarter, the stock is going higher," he said. However, when asked whether the stock could reach $30 again, Cramer said it likely wasn't possible in the near term.

"This is no longer on life support. Mike Ullman is turning this company around. ... This is one of those quarters that says: 'We're not dead yet'," Cramer said. "Is it possible that this company could make a comeback? The answer is yes."

"This is a quarter where Ullman calmed the banks, calmed the credit markets," Cramer continued. "They'll make it through the holiday season and then you've got a new story ... I think Ullman deserves thanks. Thank you, Mike Ullman."

J.C. Penney on Tuesday posted a wider-than-expected quarterly loss of $1.17 a share on $2.66 billion in revenues, but its store sales improved from the previous quarter and its stock price jumped.

Analysts had expected Penny to report a second quarter loss of $1.06 a share on $2.76 billion in revenue, according to a consensus estimate from Thomson Reuters.

(Read more: JC Penney earnings bad, but not that bad)

"Frank Blake is executing better than I've ever seen," Cramer said of the Home Depot CEO. "Blake has turned this company around. It is a powerhouse and it is just firing on all cylinders."

Cramer's thesis on Home Depot is that consumers are again starting to see value in upgrading their homes as well as increasing home values. As a result, they are again shopping at home improvement stores. However, the yield on 10-year Treasurys is still important for investors and could still affect the company's long-term growth prospects.

"Don't forget, this (past quarter) is their holiday season." he said. "If people are spending on homes, I think Lowe's will be OK. But don't over-think this, Home Depot is the best of breed."

Home Depot announced results that beat quarterly profit and sales estimates, and raised its outlook for the fiscal year. Net earnings rose to $1.8 billion, or $1.24 a share in the second quarter ended Aug. 4 from $1.53 billion, or $1.01 a share, a year earlier.

Analysts on average were expecting a profit of $1.21 a share, according to Thomson Reuters.

In retail clothing, Cramer called Urban Outfitters "the best one of all," supported by a brand that is effectively resonating with consumers. "People are spending above what they're spending at almost every other retailer because they like the Karma of it," he said.

"Growth is what we search for. This [quarter] is not cost cutting. This is revenue growth and then margin expansion. It's a remarkable quarter," he said. "They're going to make acquisitions … could increase the dividend. Urban is on all cylinders again, like Home Depot."

The company reported Monday that its fiscal second-quarter profit increased 25 percent on improved sales across nearly all of its brands.

— The Associated Press and Reuters contributed to this article.

— By CNBC's Paul Toscano. Follow him on Twitter @ToscanoPaul and get the latest stories from "Squawk on the Street"