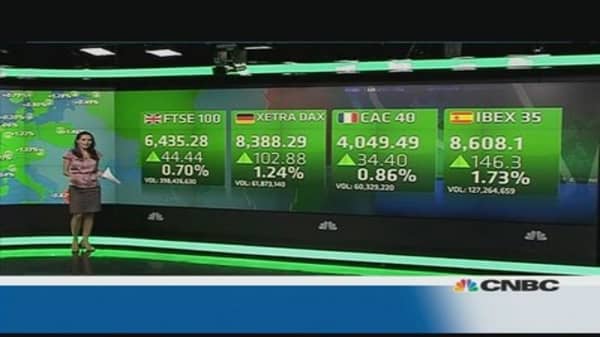 "They're certainly good numbers and we've been seeing this for the last four or five months in Europe," Richard Jerram, chief economist at the Bank of Singapore, told CNBC.

"It does seem that as the headwinds from fiscal tightening fade, then the economies are starting to lift."

Despite worse-than-expected PMI figures from France, the CAC 40 also followed the broad rally across European bourses provisionally closing 0.9 percent higher. French PMI numbers for both manufacturing and services missed expectations, with the composite figure coming in at 47.9 for August, versus 49.1 for July.

The rise in European markets came despite continued fears the Fed could end its asset purchases as soon as September. Minutes from the Federal Reserve's latest policy meeting, released on Wednesday, showed the Fed was getting set to reduce its asset buying by the end of the year, but offered no clear signal of exactly when it might do so.

U.S. stocks followed Europe higher on Thursday, with the Nasdaq posting the best one-day gain since August 1st, while the Dow Jones Industrial Average was up for the first day in seven.

In Asia, China's benchmark index outperformed the rest of Asian stocks on Thursday, after activity in the manufacturing sector appeared to rebound in August. HSBC's preliminary reading of China's purchasing manager's index (PMI) crossed the key 50-level for the first time in four months, marking an expansion in the sector. 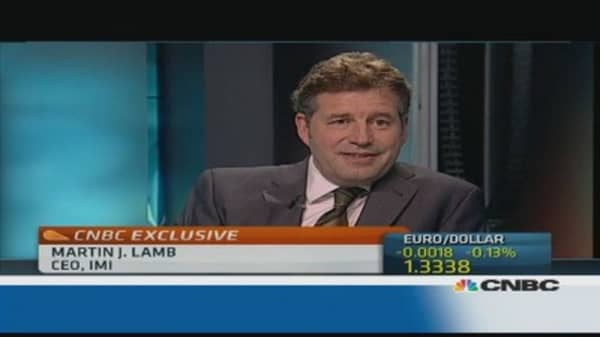 Back in Europe, the U.K. banking regulator, the Financial Conduct Authority, said it has reached a deal with 13 major banks and credit card issuers to compensate customers who were mis-sold credit card protection. The bill could be up to £1.3 billion ($2 billion), it said. Shares of Barclays, one of the banks to be hit by the charges, closed around 0.6 percent higher, despite the news.

In stocks news, shares of Dutch builder BAM closed around 20 percent lower on Thursday after it announced job cuts and lowered its outlook for its full-year results.

However, shares of Dutch retailer Ahold were over 5 percent higher at the close after it reported results that were in line with expectations. And U.K.-based engineering firm IMI was also given a lift after it announced a slight increase in first-half profit, with shares closing around 5.80 percent higher.