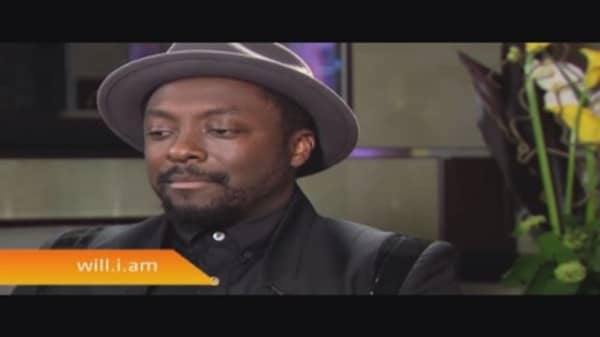 Black Eyed Peas frontman and "The Voice" judge will.i.am said Simon Cowell should be applauded for the rise of TV's music talent shows because of the opportunities they provide for young musicians.

At a time when the music industry is dominated by three major labels - Universal, Sony and Warner - will.i.am told CNBC that programs like "The X Factor" and "The Voice," which he has been a judge on for two years, provide a valuable means for people to become successful artists.

"If you want to get known, put your songs on SoundCloud and YouTube, or join a talent show," will.i.am said. "I am pleased that there is an outlet for people to go on TV. I don't care if it's on Simon's. Thank you, Simon, for having the program. Thanks for thinking of it - because the record company didn't. Thank you." 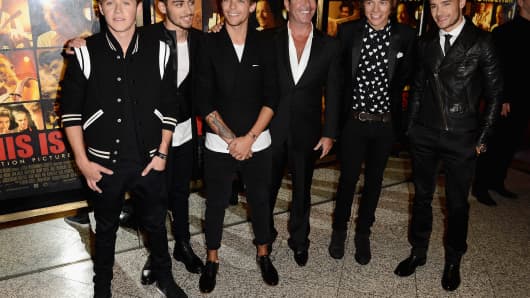 Ian Gavan | Getty Images for Sony Pictures
Simon Cowell (C) with the boy band One Direction, who appeared on the 2010 version of "The X Factor"

Music talent shows have faced a barrage of criticism since their inception by a number of musicians, including Sting, Elton John and Calvin Harris. They are critical of Cowell's brand of TV talent shows in particular for suggesting that becoming famous is incredibly easy, and that hard work and talent are secondary.

Cowell owns the television and music production company Syco which produces "America's Got Talent" and "Britain's Got Talent," as well as "The X Factor" franchise.

Sting, for instance, once told London's Evening Standard newspaper that "The X Factor" was "a soap opera which has nothing to do with music," and said Cowell had "no recognisable talent apart from self-promotion."

Others have argued that "The X Factor"'s conveyor belt of stars have formed a stranglehold on the music charts and significantly weakened the calibre of British music.

In 2009, to protest against "The X Factor" winner claiming the U.K. Christmas No. 1 single for four years in a row, a Facebook group was created to encourage people to buy Rage Against the Machine's 1992 song "Killing in the Name." The online campaign, which Cowell described as "stupid" and "cynical" at the time, was ultimately successful.

Will.i.am argued that the ongoing debate about reality TV shows and their effect on the music industry "is just tabloid journalism trying to sell magazines to create some type of drama that's unnecessary."

"The X Factor" returned for its tenth series in the U.K. last Saturday, and will.i.am has made appearances on both the U.K. and U.S. versions of the show. Last year, will.i.am and Cowell announced plans to team up and launch a TV talent competition that seeks to find and nurture young technology innovators. The show is set to be called "The X Factor for Tech".