India's corporate sector, which sits on a huge pile of foreign currency debt, is under threat as the rupee's downward spiral exacerbates the debt burden of companies already battling feeble growth and sluggish demand.

The rupee has declined 17 percent against the dollar this year, falling to record lows in recent weeks as investors shun emerging assets on fears of the U.S. winding down its monetary stimulus, which could turn off hot money flows.

"Indian companies have huge debt, not just in India but offshore as well. In the first part of the year, 40 percent of all incremental debt taken out by Indian companies was offshore in U.S. dollars...I suspect that quite a lot of that was unhedged," Andrew Holland, CEO, Ambit Investment Advisors told CNBC.

(Read more: How severe was India's slowdown in April-June)

"I worry about cash flows for Indian corporates, particularly in the infrastructure sectors, real estate sectors where you have huge amounts of debt sitting on company balance sheets," he said.

Indian companies have ramped up their overseas borrowings in the recent years to take advantage of low interest rates in global bond markets.

(Read more: Three charts that explain why India is in trouble)

The country's corporate sector has a total of $48 billion in outstanding U.S. dollar debt, with banks accounting for around $24 billion, public sectors companies for $6 billion and private sector firms for $18 billion, according to financial services firm Seymour Group. Of this, $75 million in publically listed corporate bonds is set to mature this year, followed by $4.07 billion in 2014, and $5.3 billion in 2015.

U.S. dollar-denominated debt makes up the bulk of India's external borrowings with a share of 57.2 percent at the end of March 2013, according to the Reserve Bank of India (RBI). 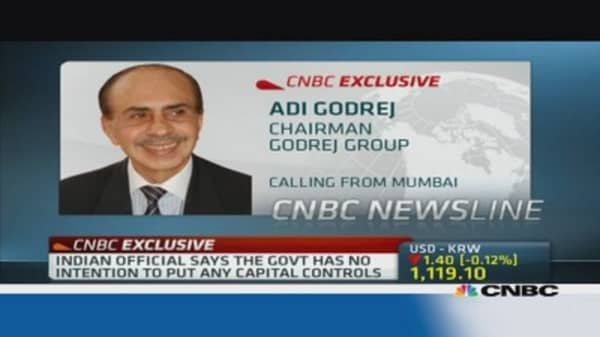 (Read more: Why the rupee may not be headed to 70)

"The free fall in the rupee is a serious concern for quite a few Indian companies with foreign currency debt. Companies will have to take the currency depreciation hit through their profit and loss (P&L) account, which will impact their reported profitability for the year," Yadav said.

Despite a threat to the balance sheets, analysts don't see rampant defaults coming.

"While profitability would be hurt, we do not expect too many defaults. The companies are likely to roll over the debt into the next year," Seymour Group's Yadav said.

Analysts say while smaller corporations that face tighter access to funding are more at risk of defaulting, private sector firms are better placed to weather the rupee's decline, as many of them with foreign currency debt have international assets.

(Read more: Fitch: India is not suffering from policy paralysis)

Indian conglomerate Reliance Industries, for example, has shale gas assets in the U.S., while Tata Motors owns Jaguar Land Rover and top telecom operator Bharti Airtel has operations in several countries across Africa. "For these companies, there is a natural hedge, which should allow them to absorb the shock better than other companies," she said.

Analysts say the RBI's stringent rules on external borrowings, which limit access to foreign funding to more credit worthy companies, will help to curtail the fallout from the declining rupee. For example, the RBI has established that the all-in-cost ceiling for debt, or the amount issuers are allowed to pay to raise the funds, is 3.5 percent over the 6-month London interbank offered rate (LIBOR) for three to five year loans.

"While there would be some ratings pressure on some entities – it is unlikely they will default," Valecha said.

India Ratings in a recent report said it may downgrade the ratings of 65 of the 290 investment-grade issuers under its coverage if the rupee remains weaker than 60 against the U.S. dollar for a sustained period. If the rupee moves beyond 65 for a prolonged period, an additional 17 corporates would experience rating pressure, it noted.

The rupee fell over 2 percent against the greenback on Tuesday to trade around the 65.60 level.