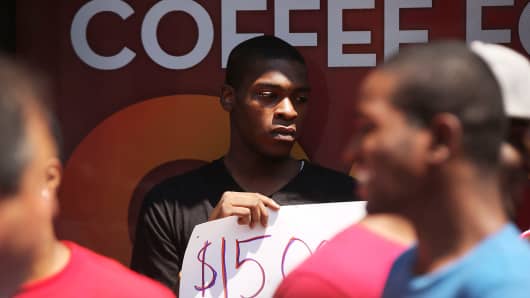 Getty Images
Demonstrators outside a Wendy's restaurant in this file photo.

American fast-food workers often earn about $7.25 an hour to make the $3 chicken sandwiches and 99-cent tacos that generate billions of dollars in profit each year for McDonald's and other chains.

Thousands of the nation's many millions of fast-food workers and their supporters have been staging protests across the country in the past year to call attention to the struggles of living on or close to the federal minimum wage. The push raises the question of whether the economics of the fast-food industry allow room for a boost in pay for its workers.

The industry is built on a business model that keeps costs—including those for labor—low so companies can make money while satisfying America's love of cheap, fast food. And no group along the food chain, from the customers to the companies, wants to foot the bill for higher wages for workers. 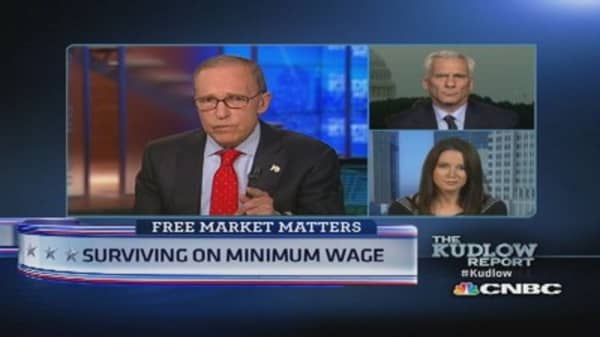 Customers want a deal when they order burgers and fries. But those cheap eats squeeze franchise store owners who say they already survive on slim margins. And the corporations have to grow profits to keep shareholders happy.

Caught in that triangle are the workers. The median hourly wage for a fast-food cook last year was $9, up from about $7 a decade ago, according to the Bureau of Labor Statistics. But many workers make the federal minimum wage, which was last raised in 2009. At $7.25 an hour, that's about $15,000 a year, assuming a 40-hour workweek. It's well less than half of the median salary of an American worker.

The protests come as President Barack Obama has called for an increase of the federal minimum wage to $9 an hour, with some members of Congress and economists calling for a hike as well. And the fast-food workers movement is getting financial support as well as training from organizers of the Service Employees International Union, which represents more than 2 million workers.

Workers protesting in cities including New York, Chicago and Detroit, are pushing for $15 an hour, which would mean wages of $31,000 a year. But the figure is seen as more of a rallying point and many say they'd be happy with even a few bucks more.

"Anything to make it more reasonable," says Jamal Harris, 21, who earns $7.40 an hour working at three different fast-food restaurants around Detroit—a Burger King, a Long John Silver's, and a Checkers—because he's never sure how many hours he'll get at any one job.

The same is true for Robert Wilson, a 25-year-old McDonald's employee in Chicago. "It was never a consistent check," said Wilson, who lives with his mother and brother who also work at the restaurant.

Wilson says he was given one 10-cent raise in the past four years. That brings his pay up to $8.60 an hour after seven years working at the restaurant.

Low wages and a lack of benefits for workers aren't anything new in the fast-food industry, of course. It's why "McJob" has been a pejorative term for so long. What's changing now is that such jobs are playing a bigger role in the U.S. economy, bringing the fast-food protests closer to home for many.

Nearly 70 percent of the jobs gained since the recession ended have been in low-paying industries such as fast-food or retail. That's even though half of the jobs lost during the Great Recession were in industries that pay between $38,000 and $68,000 a year.

Currently, the median annual wage for all U.S. full-time wage and salary workers is about $40,350, according to the Bureau of Labor Statistics. That's based on weekly earnings of $776.

The tilt toward low-wage jobs is what makes it so critical for fast-food and retail jobs to provide better pay, says Robert Reich, an advocate for workers who served as Labor Secretary in the Clinton administration. "It's impossible for the economy to run on all four cylinders unless consumers have enough purchasing power to keep the economy going," he said.

Still, raising wages for fast-food jobs means figuring out where the money would come from.

More than 90 percent of McDonald's and Burger King locations in the U.S. are owned by franchisees who say they have to worry about making rent, buying supplies, paying workers and shelling out royalties and fees to their parent company for use of their name and brand. Franchisees say they have to do this while trying to eke out a profit on the super-cheap menu items that customers have come to expect.

Franchisees say their profit margins are thin—they make 4 cents to 6 cents on average for every dollar they take in—and that they can't afford to hike pay, particularly at a time when companies are trumpeting value menus amid heightened competition.

Kathryn Slater-Carter, who owns two McDonald's in California, said that what franchisees can pay workers depends "on what money you've got left after all (the company's) interference."

Slater-Carter said that in addition to emphasizing low prices, the company has been putting more costs onto franchisees for things such as software licenses and service contracts for restaurant equipment.

Prices for food ingredients are volatile and insurance and other costs are rising, too, meaning labor is one of the few costs franchisees can control. It's why franchisees often keep hourly wages as low as possible or try to avoid paying overtime, some franchisees and union organizers say.

Not that some franchisees don't pay workers more.

Aslam Khan, chief executive of Falcon Holdings, which owns 165 Church's Chicken and 44 Long John Silver's locations, says his employees start at between $8 and $8.50 an hour. To keep the best, experienced workers, he pays $10 to $13 per hour.

He recognizes that's still not much. "These days the whole family has to work to support the family. In order to put bread on the table, you have to do whatever," he said.

Over the past three years, Khan said that his profit margins have declined from 5 percent to 1 percent as food and other costs have climbed and menu prices remained flat. 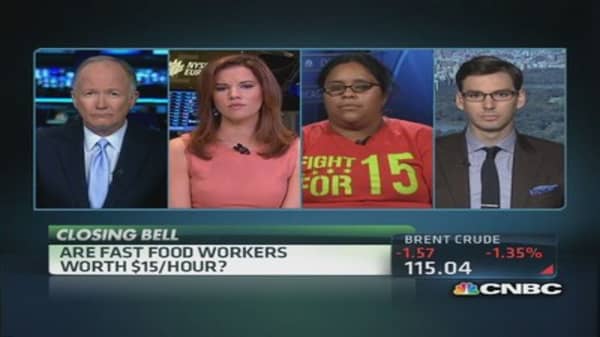 Many labor groups point to the profits of the fast-food companies—and the pay packages of their CEOs—when trying to assign blame for low wages for workers.

Last year, the five big publicly traded fast-food companies together earned 16 cents in profit for every dollar of revenue. That's 73 percent better than the average big U.S. company, according to FactSet research firm. And that compares with earnings of 4 cents for every dollar of revenue made by discount retailers Wal-Mart Stores and Target, which also have come under fire for not paying workers enough.

McDonald's, the world's biggest burger chain, for example, reported a profit of $5.5 billion last year on $27.6 billion in sales. CEO Don Thompson got a pay package worth $13.8 million.

Still, publicly traded companies are under pressure from shareholders and creditors to maintain or improve profits; even a slight change from quarter to quarter can send stock prices moving in either direction.

In emailed statements, McDonald's and Burger King both said they don't determine wages for workers, noting that the vast majority of restaurants are run by franchisees. McDonald's also noted that it is "in the business of providing affordable, high quality food." The company said that raising entry-level wages would mean higher overall costs, which could result in higher prices on menus.

"That would potentially have a negative impact on employment and business growth in our restaurants, as well as on value for our customers," the company said.

Representatives for Wendy's and Yum Brands, which owns KFC, Taco Bell and Pizza Hut, didn't respond to a request for comment.

Labor organizers dismiss the idea that companies can't influence worker pay. They say companies have near total control of every other aspect of operations through their strict franchise agreements, down to which napkins, ketchup and computer systems are used, as well as the prices that are charged for food.

"Corporations try to insulate themselves legally and morally by dictating everything but working conditions," says Stephen Lerner, a longtime union organizer.

The customers and workers

If franchisees and companies can't, or won't, pay more, that leaves the people who buy fast food. "This all comes back to the consumer," says Adams, the former McDonald's franchisee turned consultant.

Although many Americans say they support higher wages for workers, the reality is that people flock to the cheapest meals, which cut into profits. It's why fast-food chains have been stepping up deals and promotions in the weak economy.

If prices went up noticeably at McDonald's, for example, 23-year-old Eugene Santos said he would probably find someplace else to eat.

"That's probably one of the reasons why it's a quick stop for a lot of people. They enjoy the convenience and affordability," said Santos, a self-employed resident of Providence, R.I., who was eating at a McDonald's recently.

The weak job market tilts the power in favor of employers, who can easily find replacements who are willing to work for low pay. That means the ability to keep up demonstrations that capture public attention is critical.

Yet organizing workers has been notoriously difficult in the fast-food industry, given the high turnover rates and ranks of younger workers who see the jobs as temporary gigs.

Consider the series of protests over the past several months that began last November in New York. Despite the widespread media attention, the turnout has been mixed and it's not clear what impact, if any, they've had on business.

When the demonstrations arrived in St. Louis, for example, organizer Rev. Martin Rafanan said about 100 workers and supporters protested at around 30 locations. That meant they were spread relatively thin, and no stores had to shut down as a result. There's been greater support in other cities including Seattle, where protests ended up temporarily closing down a Burger King and other stores, according to local reports.

But even in New York City where the protests have delivered the biggest turnouts, it hasn't necessarily translated to broader awareness among customers. Shortly after about 400 protesters targeted a McDonald's by the Empire State Building this past week, for example, business appeared normal and some customers inside said they weren't aware of the demonstration. The same was true at a McDonald's a few blocks away.

Garrett Mattson, a 24-year-old from Warren, R.I. started working at McDonald's when he was in college and stayed on after graduation because he couldn't find another job. He earns $7.75 an hour.

He said he would probably support the effort to raise pay if it came to the restaurant where he works. But even though the job is important to him now, he doesn't consider it a career path.