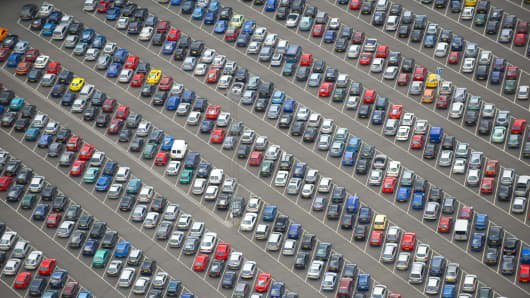 Four of Europe's largest car manufacturers are expected to lose a combined five billion euros ($6.6 billion) in the region this year, according to Moody's Investors Service, as demand falls to its lowest level in two decades.

The auto sector in Europe traded lower after the release of the report on Wednesday. The ratings agency forecast that Ford Europe, GM Europe, Fiat Chrysler and Peugeot-Citroen would report a combined loss of 4.9 billion euros in 2013 – the same as in 2012 – given the "unbearable situation" in the region's car market.

These companies in particular would be hit again because they are more vulnerable to a car sales slumps in Spain, Italy and France, Moody's said.

"We continue to forecast European light vehicles sales to decline 5 percent on the year in 2013," they warned, adding that the profit margins of the aforementioned carmakers would be "under pressure because of overcapacity and low demand in western Europe."

On a more positive note, Moody's analysts said their lower expectations for car sales in France and Italy were offset by stronger-than-expected growth in the U.K., while on a global level, they forecast light vehicle sales growth of 3.2 percent this year.

In June, car sales in the European Union fell to their lowest since 1996, according to the European Automobile Manufacturers Association (ACEA), prompting analysts to warn that the data would get worse before it got better.

Though Moody's analysts said car sales in Western Europe had reached a bottom this year and would rebound by 3 percent in 2014, this figure was revised down from a previous forecast of 5 percent. Moody's also added that an uptick in demand would not "signal an upward trend."

Anil Valsan, lead analyst at the Global Automative Center, agreed with Moody's assessment, though he forecast a delayed return to sales growth. "At least in this year we won't see a recovery in Europe and in fact, we don't forecast positive sales growth in the region until mid-2014," he said.

Industry watchers have to wait for July and August car sales figures to be published on September 17 when the ACEA returns from a summer break. Auto analyst Colin Couchman told CNBC the August figures were likely to show a continued trough in sales, although summer was traditionally a bad time for auto retailers.

Couchman, the director of European Light Vehicle Forecast Research at IHS Global Insight, was less pessimistic about the market's recovery on the back of recent data showing an upturn in business and consumer confidence in Europe.

"We're actually starting to get more confident about the European market," Couchman told CNBC on Wednesday. "Europe is not one market and some countries - particularly the U.K. and northern Europe - are doing well."

On a macro-economic level, Couchman noted that Europe was seeing an end to sovereign credit-rating downgrades and that industrial production was rising again. These comments were supported by the latest economic growth data and business activity figures from the euro zone on Wednesday.

If all else fails, though, Couchman highlighted one element of automobiles that could still support the industry. "Cars wear out and they will always need replacing," he said.