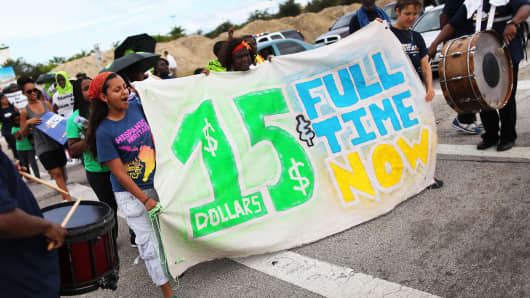 In the ongoing war to boost the federal minimum wage, the skirmishes have been getting larger and louder, yet success seems as far away as ever.

The latest round of protests Thursday targeted Wal-Mart, with organizers turning out crowds of varying sizes in 15 cities across the country demanding the world's largest retailer pay all employees at least $25,000 a year and stop what they claim is retaliation against strikers.

Two former Wal-Mart workers and one current employee were arrested in New York outside the Manhattan office of investment banker Christopher Williams, a member of the Wal-Mart board of directors.

Labor experts say that proponents of an increase in the $7.25 an hour federal minimum wage, which buys less in real terms today than in a half century, face a set of powerful economic winds that have been blowing for decades: the weakening of unions, the flattening of wages versus productivity, sluggish economic growth and tepid support from politicians.

Thursday's protests followed similar demonstrations last week when thousands of workers at fast-food restaurants in dozens of U.S. cities walked off the job demanding higher wages. Organizers called that effort one of the largest strikes ever against the nation's fast-food companies.

The debate over minimum wage has taken on new energy as the average worker's wage remains stalled in an economy still trying to shake off the lingering damage of the Great Recession. But the lowest paid of American workers have been steadily losing ground to a variety of economic and political forces since the 1970s.

The Fair Labor Standards Act of 1938 established the hourly minimum wage rate at 25 cents for covered workers. Since then, it has been raised 22 times, in part to keep up with rising prices. The latest boost, in July 2009, brought it to $7.25 an hour, or about $15,000 a year for a worker putting in 40 hours a week.

Opponents of a higher minimum wage, supported by a number of economic studies, contend that it would eliminate the very entry-level jobs that low-skilled workers need the most.

Wal-Mart officials say the recent protests don't reflect the views of all of its workers, and that its low-wage jobs offer entry-level employment for low-skilled workers who can earn more as they develop skills and take on more responsibility.

More than 99 percent of Wal-Mart employees make more than minimum wage, and some three-quarters of the company's U.S. managers began with the company as hourly workers, Wal-Mart CEO Michael Duke told CNBC.

Wal-Mart has also responded forcefully to the periodic protests by unions and other labor groups calling for the company to boost pay and benefits.

In June the company filed a lawsuit in Fort Worth, Texas, against the United Food and Commercial Workers International Union for what it claimed were "confrontational and abusive" demonstrations at stores around the country over the past year.

"They have screamed through bullhorns, paraded around with banners and signs on sticks, conducted in-store 'flash mobs,' and diverted management and local police from their normal job functions," the lawsuit said, according to NBCDFW.com.

The company has filed similar legal actions against local groups in Florida and California.

Despite political support for increasing the federal standard, only 20 states and a number of cities have passed laws requiring higher minimum wages. (San Francisco, at $10.55 an hour, is the highest.) 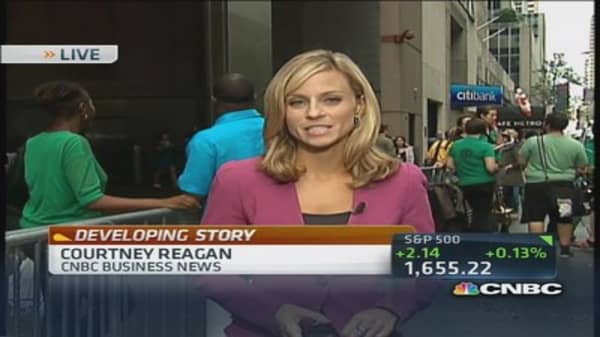 The District of Columbia has become the latest battleground, where Mayor Vincent Gray could decide as early as this week whether to sign a minimum wage bill that would require big retailers, such as Wal-Mart, to pay 50 cents an hour more than the $8.25-an-hour local minimum wage.

If he signs the bill recently approved by the City Council, Wal-Mart could shelve plans to bring six stores—and 1,800 jobs—to the nation's capital, where unemployment, at 9 percent, remains higher than the national average of 7.3 percent.

Government wage mandates have taken on increasing importance following the decades-long decline of labor unions that negotiated pay and benefits. But the recent union-backed protests, which represent a shift away from more traditional efforts to recruit new members, company by company, have been much less successful.

"I think organized labor to some extent bears a significant responsibility for its own demise," said Julius Getman, a professor of employment law at the University of Texas. "Because they didn't put enough effort into organizing they were very much satisfied with the status quo for a long time."

But unions have also seen their power eroded by a lack of political support on Capitol Hill, most notably from the Democrats who have traditionally been organized labor's biggest backers, he said.

"When President Obama talks about the need to strengthen the middle class, it's stunning to me the extent to which he does not mention unions," said Getman. "It does reflect a modern sense unfortunately that unions have become outdated, that unions no longer are relevant."

Popular support for higher wages has also been tempered by American consumers' appetite, and increasing reliance, on the ultralow prices offered by fast-food chains such as McDonald's and superstores like Wal-Mart.

"We all rather buy cheap at McDonald's," said Getman.

In one detailed study, MIT economist Jerry Hausman found that the arrival of superstores like Wal-Mart in a given area cut prices across a variety of products by an average of about 25 percent. While consumers across all income groups benefited from the drop in prices, low-income households benefited the most, the study found.

But stalled wage growth, especially for the lowest-income households, is beginning to hit discounters where it hurts the most: on the bottom line.

Flat wages, combined with higher payroll taxes, dampened consumer spending in the first half of the year, prompting Wal-Mart last month to warn investors to expect lower sales and profit results in the second half.

Depressed wages also cost taxpayers, according to an analysis earlier this year by the Democratic staff of the U.S. House Committee on Education and the Workforce. The report, which looked at the impact of Wal-Mart's operations in Wisconsin, found that the retailer had more workers enrolled in the state's public health-care programs than any other employer.

State and local public assistance such as earned-income tax credits, food stamps, Medicaid, housing assistance and other state programs for low-income households cost taxpayers as much as $5,800 per employee, according to the researchers. For a 300-worker store, the total tax burden came to as much as $1.7 million a year, the report said.

Instead of devoting taxes to helping low-income households, proponents of higher minimum wages contend the government should do more to see that the fruits of economic growth and higher productivity are more broadly distributed.

Before 1970, wages rose almost in lockstep with the rising productivity of the workforce. But for a variety of reason, wages flattened, except for a brief period in the 1990s, while productivity continued to advance.

"We made deliberate economic policies that led to a reversal of that broadly shared prosperity," said Heidi Shierholz, an economist at the left-leaning Economic Policy Institute.

"It wasn't like we had an equal society in the pre-1970s world, but the growth of the economy then was not captured only by a tiny sliver at the top. You had rising living standards at the bottom, middle and the top."

One of the most powerful policies is the Federal Reserve's balancing act between the "dual mandate" of maintaining low unemployment and low inflation. The two goals often conflict: economic growth creates jobs, but also sows the seeds of inflation.

Shierholz argues that the modern Fed has leaned too heavily against inflation, allowing unemployment to rise to levels that dampened wage growth.