Some big news today even before the opening bell. Home Depot CEO Robert Nardelli resigned this morning--effective immediately. Vice Chairman Frank Blake will take over the top spot. Nardelli had been CEO for the past six years and had upset many investors with the size of his pay package and the company's performance. Talking about the sudden change on "Squawk Box" was retail analyst David Schick from Stifel Nicolaus & Co. He spoke by phone.

Schick said that he expected no big changes in the way Home Depot will be run in the months ahead. He said that Nardelli's resignation was somewhat based on "politics" than the actual running of the company. And that's why Schick says he expects Blake to continue many of Nardelli's initiatives.

Wall Street Journal reporter Alan Murray was a guest host on "Squawk." He said he thinks Nardelli upset labor unions (Home Depot workers) and hedge fund investors (investing in Home Depot) and that helped bring about his fall. He also said that investors were also upset about Nardelli's moving Home Depot into the "supply " area instead of returning profits to stock holders.

FYI- Nardelli will take a $210 million separate package with him. Both he and Blake had worked one time for GE--the parent company of CNBC. 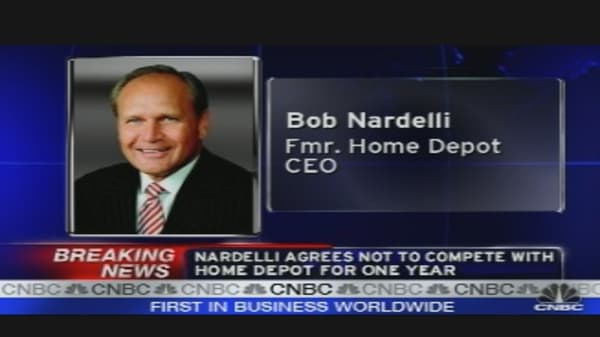