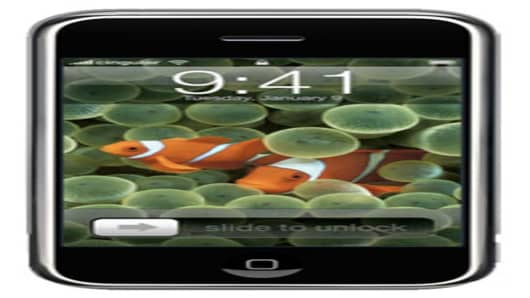 CNBC's Jim Goldman reported from Macworld that the new iPhone will run on Apple's OSX operating system and have a touch screen controller called "multi-touch" that replaces all buttons on the phone's face. The iPhone will sync with the company's iTunes store.

Apple's iPhone will work exclusively on Cingular's wireless network. It is priced in the United States at $499 for 4GB and $599 for 8GB. Apple said the iPhone will be available in the U.S. in June, reaching Europe late in the year and Asia next year.

Jobs said Apple is going after Microsoft and Palm with new mobile software "that's at least five years ahead of anything out there."

Jobs boasted that Apple's phone would "reinvent" the telecommunications sector and "leapfrog" past the current generation of hard-to-use smart phones.

"Every once in a while a revolutionary product comes along that changes everything," he said during his keynote address at the annual Macworld Conference and Expo. "It's very fortunate if you can work on just one of these in your career. ... Apple's been very fortunate in that it's introduced a few of these."

While an independent investigation found that "no current management had any misconduct," Jobs told CNBC's Goldman that "we did find some things that I wish we hadn't found, and, as CEO, to some extent, (that I) am responsible for."

He said they've turned all information over to the Securities and Exchange Commission.

"I don't think (it will) effect current management and I think everything is going to be just fine," he told CNBC. "I serve at the pleasure of the board and shareholders and as long as they want me, I would love to keep doing this job."

As part of the company's increased emphasis on consumer electronics, Apple is dropping the word "Computer" from its name, and will be known simply as Apple Inc.

Jobs also introduced a $299 device called Apple TV, which is designed to bridge computers and television sets so users can more easily watch their downloaded movies on a big screen. A prototype of the gadget was introduced by Jobs in September when Apple announced it would sell TV shows and movies through its iTunes online store.

The product could be as revolutionary to digital movies as Apple's iPod music player was to digital music. Both devices liberate media from the computer, allowing people to enjoy digital files without being chained to a desktop or laptop.

"It's really, really easy to use," Jobs told the crowd at San Francisco's Moscone Center before demonstrating the system with a video clip of "The Good Shepherd." "It's got the processing horsepower to do the kinds of things we like to do."

Earlier in the presentation, Jobs announced that iTunes has sold more than 2 billion songs, reaching that milestone just 10 months after selling one billion songs, which took three years to accomplish.