At CES this week, Microsoft founder Bill Gates called it connected entertainment. Tuesday at Macworld, Steve Jobs called it Apple TV. At best, both allow universal access to every piece of digital content on a PC. At worst, it’s another complex device consumers don’t want to figure out-like a Windows Media Center PC.

Gates hopes to convince people to take advantage of Media Center functionality by incorporating it into Vista, the company’s new operating system due out later this month. But Americans are an on/off society when it comes to home entertainment. We don’t want countless menus and complex file management. If the perpetually blinking 12:00 on Americans’ outdated VCRs isn’t enough to convince Microsoft, the fact that only 20 million Media Center PCs have been sold since 2003 should be.

Fortunately, after listening to Apple CEO Steve Jobs’ keynote, it seems as though he grasps the on/off concept. Rather than force Macs into consumer dens, the company has taken the network route with a device called Apple TV that allows users to wirelessly stream digital media from their PCs to their TVs. Apple TV sports a very iPod-like interface-something consumers are clearly comfortable with, since more than 70 million have been sold to date-but it also comes with a 40GB hard drive, high definition video capabilities, compatibility with virtually every form of wireless and an HDMI (high-definition multimedia interface) input. The elegant remote resembles a white iPod shuffle. (Just look at the two devices along side each other.) 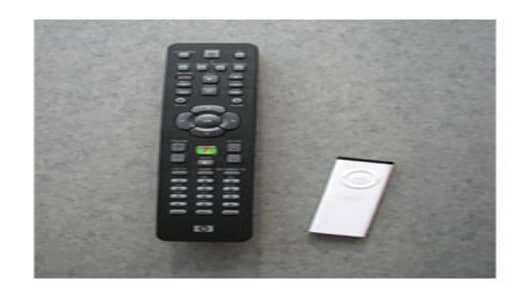 Is Apple on the right entertainment track? Well, according to research firm, the Diffusion Group, televisions that can receive high-quality Web-based content are likely to find a home in 162 million households by 2011. The Apple TV is the perfect device to feed content to those televisions.

As a side note, Apple also announced a new partnership with Viacom unit Paramount Pictures that puts older movie titles like “Forest Gump” in the iTunes library. No word on new titles, but getting beyond Disney releases is a big step toward adding some more flavor to iTunes’ offerings.

As revolutionary as the iPhone is, the fact that its tied to Cingular doesn’t do me-a contractually-bound Verizon customer-any good. But the Apple TV could easily be the first step in changing the way I enjoy digital content around my house. In other words, it’s exactly what I wanted.