An independent panel said BP failed to emphasize safety at its U.S. refineries before a 2005 explosion at a Texas City plant killed 15 workers.

BP said it plans to implement the panel's recommendations as part of its continuing effort to strengthen and standardized process safety management at its five U.S. refineries. "We asked for a candid assessment from this diverse group of experts and they delivered one," BP Chief Executive John Browne said, in a written statement. 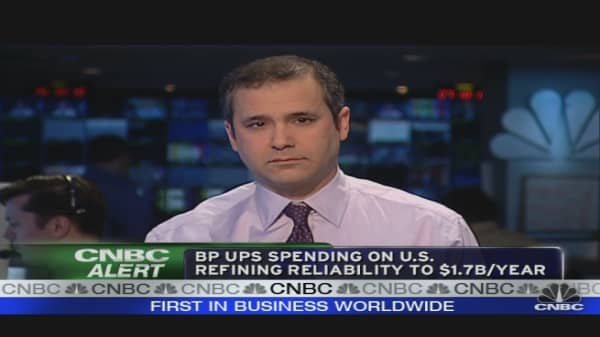 BP added it had already taken some actions that were in line with the panel's recommendations.

The report came from a panel led by former Secretary of State James Baker, and was commissioned by BP at the urging of federal safety regulators investigating the deadly blast at BP's giant refinery in Texas City, Texas, on March 23, 2005.

CNBC's Scott Cohn said the Baker panel found that BP created more pressure to cut costs at the expense of safety. This led to too few resources being allocated for safety, he said.

Cohn also said the report found that instead of focusing on process safety, BP focused on personnel safety.

This means BP looked closely at personal injury rates as an indication that it had acceptable safety procedures in place at its U.S. refineries. By relying on this data, BP had a false sense of confidence that it was adequately managing its safety risks, the panel said.

The 374-page report makes a dozen recommendations, including having an integrated process safety management system, process safety auditing, and board monitoring.

The oil giant was given the report last Wednesday, two days before it announced that Browne would step down ahead of schedule.

The report is sure to be scruntized by attorneys, who are still pursuing a number of civil claims against the company brought by the families of the 15 workers who were killed.