Huckabee advocated change on several key fronts: taxation, health care and U.S. relations with Russia -- and used the NASCAR race as an analogy for his competitive edge: “At some point these cars out in front of me…start bumping into each other and get hauled off the track, and that’s when people start saying maybe we ought to put our fuel in Huckabee’s car,” he said. 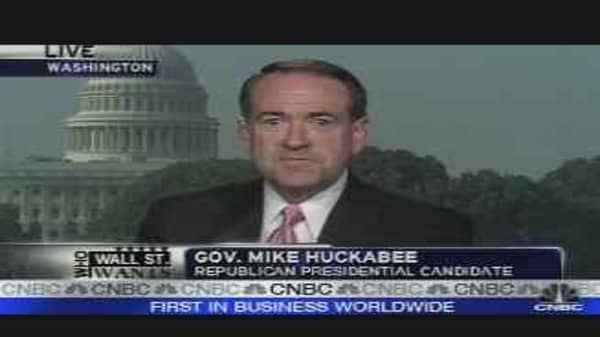 What does he think America wants in its next president? “Big and bold ideas,” he said. “I’m not sure that a lot of folks are doing anything other than playing it safe.”

The current tax structure pushes U.S. capital and jobs abroad, he said. Huckabee faulted the U.S. government for taxing investments, earnings, wages and dividends because he believes it doesn’t provide adequate incentives for keeping capital in the States. The U.S. has “$11 trillion parked offshore right now, that’s been moved away from America,” he said. His fair tax proposal, however, would bring back some “serious” investment. The U.S. government ought to limit taxation to consumption rather than “penalize” Americans for being “productive,” he said: “Let’s keep American capital flowing.”

He declared that U.S. health care is making America “bankrupt": “We don’t have a health-care system, we have a sick-care system.” While Americans spend nearly 17% of GDP on health care, “most European countries” spend some 9.5%, he said. If the U.S. cut that figure to 11%, it would save $700 billion per year, he added.

With an intensifying war of words between Presidents George W. Bush and Vladimir Putin, what are Huckabee’s thoughts on U.S.-Russian relations? “We have every reason to ask some tough questions, but those are best asked in a face-to-face meeting -- rather than in the newspapers,” he said.