British bank Barclays's hopes of taking over Dutch rival ABN Amro won a boost on Tuesday when a court adviser said ABN could sell its U.S. arm without a shareholder vote.

The surprise opinion from Advocate General Vino Timmerman, a law professor, is an indication of how the Supreme Court will rule on the $21 billion sale of ABN's Chicago-based bank LaSalle to Bank of America. 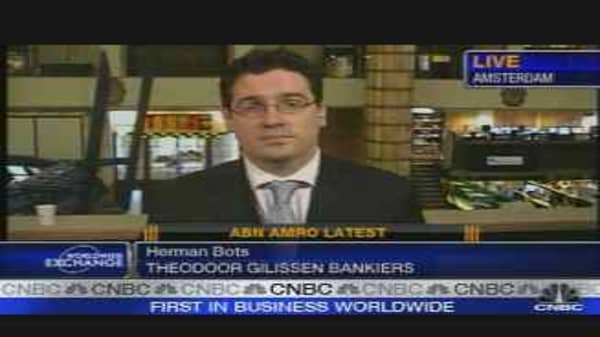 Both deals would be the biggest bank takeover.

"It's clear the Dutch Supreme Court doesn't have to take the advice of the advocate general, but obviously it's quite a severe blow to the aspirations of Royal Bank," said Alex Potter, bank analyst at Collins Stewart in London.

The Supreme Court follows the advocate general's opinion in eight out of 10 cases, according to analysts at Keefe, Bruyette & Woods (KBW).

The Supreme Court is due to rule in mid-July. The banks involved have a week to reply to the latest opinion, which reversed a ruling by a commercial court in May, which said ABN shareholders should vote on the LaSalle deal.

"The Advocate General advises the Supreme Court to quash the Commercial Court's ruling," Timmerman said in a statement, adding that the LaSalle transaction does not need shareholders' approval under article 2:8 of the Dutch civil code.

"It's not a knockout but it makes the consortium bid as it stands void. They need to rethink their strategy," said Vasco Moreno, analyst at KBW.

Shares in ABN were down 0.1% to 34.41 euros, as the opinion reduced the chances of a bidding battle, dealers said.

Barclays shares fell 1.3% as investors reacted negatively to its greater chances of success. Shares in RBS and its consortium partners, Santander and Fortis, were all little changed.

The Supreme Court's ruling will put either Barclays or the consortium in pole position to win the acrimonious battle for ABN, but it will not seal a deal as analysts said it is likely either would return with a revised offer.

It also strengthens the hand of BofA, which has said its deal for LaSalle is binding but was considering a compromise with RBS to resolve the dispute, sources have said.

"It almost removes the need for them to think about negotiating at the moment. If this gets ratified by the Supreme Court then Bank of America are getting LaSalle full stop," Collins Stewart's Potter said.

BofA said two weeks ago that it would delay its lawsuit to wait for the Dutch Supreme Court's ruling.

Dutch shareholder lobby group VEB said it will continue to fight the sale of LaSalle after the advocate general's opinion.