Rising interest rates and problems in the subprime mortgage market recently put pressure on the financial sector. But Joseph Fenech, managing director of Sandler O’Neil, told CNBC’s “Power Lunch” viewers that certain small banks, unaffected by the some of these "hot buttons," are the way to go.

“Valuation, also from a credit perspective," Fenech said about PA Commerce Bank . "They do not have the exposure to some of the hot button areas like subprime mortgage.” 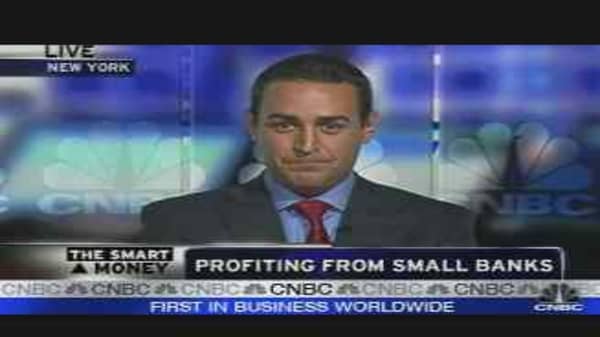 In addition, Vernon Hill, chief executive at Commerce Bank, has resigned, raising speculation that the bank could be for sale. Should a deal happen, Fenech speculated that the cost involved of having to rebrand PA Commerce Bank could “lead them to consider a sale as well” -- which, given the valuation, could be beneficial for investors, he believes.

“[Valley National is] the most valuable independent community banking fanchise in the tri-state area,” said Fenech. “The credit record here over time has been impeccable."

Fenech said that although he doesn’t consider the management to be particularly anxious to sell, the CEO of Valley National is almost 70 -- leading to speculation that the company might consider selling itself upon his retirement.

Although the stocks aren’t cheap, Valley National owns about half of its branches, signifying that many of the properties have a strong estate value. “It makes the valuation somewhat more palatable,” said Fenech.