General Motors on Tuesday said it posted a quarterly profit that trounced Wall Street estimates as it benefited from cost-cutting and growing sales overseas, sending shares up as much as 6 percent.

GM which posted a second quarter profit of $891 million against a massive $3.4 billion loss a year ago, also said its loss narrowed at its North American operations. But GM expects to keep the pressure on costs, a key factor in what are likely to be contentious labor talks throughout the summer.

Analysts, on average, had been expecting adjusted earnings of $1.08 a share, according to Reuters Estimates. Forecasts on that basis had ranged from 50 cents to $1.64 per share. 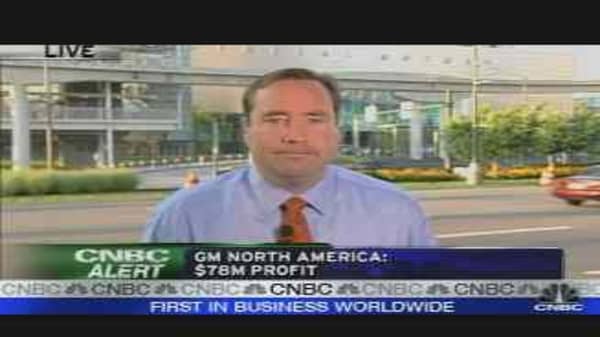 Lehman Brothers analyst Brian Johnson said GM beat estimates largely due to better performance at GMAC -- its former finance arm in which it retains a 49-percent stake -- and strong earnings in markets outside North America.

Overseas sales accounted for 58 percent of auto revenue in the second quarter. GM also reported $139 million in net income attributable to GMAC for the quarter.

Revenue from auto operations rose to $45.9 billion from $44.8 billion a year earlier.

Total revenue fell to $46.8 billion from $53.9 billion, including results from the GMAC financing arm, which was taken over last year by a group led by private equity firm Cerberus Capital Management. GM realized net income of $139 million from the 49-percent share it still holds in GMAC.

"It's true that our North America team has made huge improvements, and we appreciate everyone's hard work," Chief Executive Rick Wagoner said in a statement. "But our current earnings clearly demonstrate we've got more to do."

GM, which had lost more than $12 billion in the past two years, is in the middle of a sweeping restructuring that includes slashing more than 34,000 jobs and closing 12 plants in North America.

On an adjusted basis, the largest U.S. automaker reported income from continuing operations in North America of $78 million, compared with a loss of $39 million a year earlier.

"Much of that was really a function of cost," Chief Financial Officer Fritz Henderson told reporters shortly after the company announced results.

To Keep Pressure on Cost Cuts

Henderson said GM needed to keep up the "pressure" on cost-cutting efforts, including cutting its $4.8 billion annual health care bill.

Goodyear Tire & Rubber in December agreed to set up a health-care trust fund with a one-time $1 billion payment in cash and stock that was meant to free the company from future health-care obligations.

GM's Henderson declined to comment on the prospects for such a deal for GM or other aspects of the company's ongoing talks with the UAW.

The automaker had estimated its total exposure to helping Delphi emerge from bankruptcy with lower labor costs at $7 billion.

Including Tuesday's pre-market gains, GM shares were up almost 13 percent since the start of the year, although they remained 9 percent below their high above $38 from late June.

Buoyed by in part by expectations for a ground-breaking deal with the UAW that could reduce health care costs, GM shares have outperformed the S&P 500 index, which is up about 4 percent since the start of the year.