Oil Falls More Than $2 to $76 After Hitting New Record

Oil prices retreated after jumping to a new record Wednesday on the government's report of a steep drop in crude inventories and surge in refinery activity.

Crude prices initially rose after the Energy Department's Energy Information Administration reported that oil inventories fell by 6.5 million barrels last week, far more than expected. But gas futures fell on word that refiners ramped up their operations much quicker than expected. As the slide in gas futures prices accelerated, oil prices had little choice but to follow, said Phil Flynn, an analyst at Alaron Trading Corp. in Chicago. 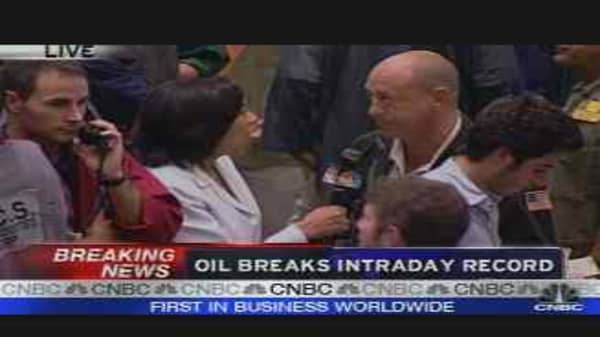 "The refineries have finally gotten their act together," Flynn said. "They're back to normal, almost."

As the industry rebounds from a spring and early summer in which refiners experienced an unusual number of outages, it is drawing down crude inventories that had hit 9-year highs. Some investors see that draw as a sign crude inventories are tightening.

But traders also remember last summer, when oil prices plummeted by almost $20 in a little over a month after hitting record highs.

"Oil does have a tendency to peak in late summer," Flynn said. "Seasonally-speaking, this bull market's on borrowed time."

On the other side of the petroleum supply chain, refineries are producing more gasoline. That news sent September gasoline futures down 7.97 cents to $2.0262 a gallon on the Nymex.

Retail prices typically lag the futures market, and prices at the pump fell by 0.9 cent overnight to a national average of $2.867 a gallon, according to AAA and the Oil Price Information Service. Gas prices peaked at $3.227 a gallon in late May. Gas futures have fallen steeply in recent weeks as refineries have ramped up operations.

Refineries are also churning out more distillates, including heating oil. Nymex heating oil futures fell by 5.01cents to $2.0731 a gallon.

Analysts surveyed by Dow Jones Newswires, on average, had expected crude inventories to fall by 690,000 barrels. Refinery utilization jumped by 1.9 percentage points to 93.6 percent of capacity, more than double an expected increase of 0.7 percentage points.

Demand for gasoline remains strong, the EIA said, averaging nearly 9.7 million barrels per day over the past 4 weeks, up 1.1 percent from the same period last year.

But Jason Schenker, an economist at Wachovia Corp., said demand growth has actually slowed over the last two weeks. If that trend continues, and inventories of gasoline and heating oil continue to grow, there will be few fundamental reasons left to support high oil prices.

Analysts have placed much of the blame for the recent run-up in oil prices on speculators and technical buying by large investment funds. But the run can only last so long, many analysts argue.