Hand-painted python handbags, personal submarines and a Warhol for your office. Not only are the rich getting richer, but the things they like to buy are more expensive.

Not only are the rich getting richer, they are also growing in numbers. A recent report from Cap gemini shows that the number of U.S. millionaires rose 8.3% to 2.9 million and 9.5 million worldwide. The report also found that “ultra-high-net-worth individuals” – those with investible assets of $30 million or more, rose 11.3%.

The big-money world of private equity is also creating new wealth. According to the Private Equity Council, a $1,000 invested in the top-quartile PE firms in 1980 would have returned $3.8 million to the investor by 2005. Talk about smart money.

And in case you think the recent market tumult will bring a burst of austerity or prudence, think again.

“Anytime the market enters a volatile state or a bear market, there is always a knee-jerk reaction for the wannabe players, to show they are unaffected”, says Marshal Cohen, chief retail analyst with the NPD group. “Big screen TV’s in every room, jewelry, high-end vacations, upgrades to the kitchen – the luxury market goes up”, says Cohen.

Forget about owning a Bentley, Ferrari or private jets -- or all of them, for that matter. They're hardly special anymor. The super-rich now spend their vacations in space and have private submarines.

“Especially in a volatile market”, says Cohen, “the young luxury consumers go out of their way to show they are unaffected. The market acts as an instant trigger, as if the money is burning a hole in their pocket.”

The art market, for instance, is has been smoking hot, driven by new buyers, including such Wall Street types as hedge fund managers. Christie’s International this year recorded the biggest half-year sales in art market history. The auction house netted global sales of $3.25 billion for the first six months of 2007. During that time 358 works sold for more than $1 million, compared with 189 during the same period last year.

“It’s all about taking it to the extremes – because you can”, says Stellene Volandes, senior editor of fashion and jewelry for Departures magazine. Volandes says along with art, autos and vacations, the fashion classics are also making a comeback, like designer Oscar de la Renta, who is “synonymous with opulence and luxury”.

Volandes has also seen an explosion in ready-to-wear pieces, “now you can go to Bergdorf’s and get a $15,000 gown off the rack”, she adds. 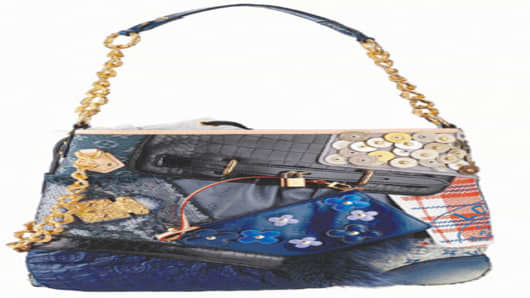 Expensive accessories have long been status symbols of the wealthy and the prices are more astronomical than ever. Take Louis Vuitton’s Patchwork bag – the “it” bag sold out immediately earlier this year, even with a $45,000 price tag. Only 24 were made and were each pre-sold.

Volandes says such goods are must-haves for the super rich. “People want exclusivity and what companies do in response in make the prices astronomical and only make a few”, says Volandes.

Instead of crocodile leather the ultra-rich are buying hand-painted python and anaconda snake skin. Who needs a Rolex when the the ultra-rich brand is now Franck Muller, which sells high-end watches for more than $700,000. Looking for a new pen? How about a Mont Blanc encrusted in jewels. It will also set you back $700,000.

And let's not forget about mega-yachts and other seafaring vessels. U.S. Submarines, a Portland, Ore.-based company, builds submersibles for the super-rich.

The subs are custom-built and take about one year to construct. A small one costs $1.5 million while the largest model, the Phoenix 1000, sets you back $80 million.

The company’s midsize model is the Seattle 1000 comes equipped with five staterooms, five bathrooms, two kitchens, a gym, a wine cellar and an observation portal, with a price tag of around $25 million.

Jones, by the way, is also building the world’s first undersea resort in Fiji.

This year’s World Wealth Report by Capgemini also included the study’s first breakdown of philanthropic giving. It found that individuals worth $1 million or more donated a record $285 billion in 2006.

The total includes $1.9 billion from Berkshire Hathaway founder and billionaire Warren Buffett -- the first installment of a 20-year pledge of more than $30 billion dollars.

New age ultra-rich philanthropists are changing the face of charitable giving in America. Most of them have earned their cash on Wall Street or fast-moving, money-spinning startups. The number of private foundations increased 85% between 1991 and 2003. Not only are they diving into philanthropy earlier, their money is being spent while they’re still alive, rather than setting up foundations in their wills.

While rich investors are sensitive to recent market concerns, it is not decreasing their spending power. The ultra rich have the cash to experiment and their options are broader than ever.