Energy stocks are still a solid investment for the long haul, say market strategists, though rampant speculation and big price swings could make it a bumpy ride for investors. 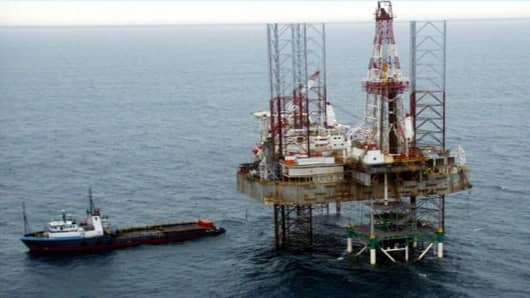 Shell
** FILE ** This undated photo shows a Shell Oil rig in the Niger Delta, Nigeria. Nigeria's latest hostage crisis came to a peaceful end Sunday, June 4, 2006, as six Britons, one American and one Canadian held captive for two days were released unharmed, looking tired, but in good health. A group of unidentified militants from southeastern Bayesla state who were demanding jobs and money kidnapped the expatriates Friday from an offshore oil platform operated by Dolphin Drilling Ltd. (AP Photo/Shel

Apache is an oil exploration and production outfit that has good potential for production growth, according to Bath.

"We like the oils in general and Apache is one of those unique names with good opportunities for production growth and its assets are located in a good stable environment."

Bath says he tries to avoid energy companies with assets in areas with an uncertain politcal environment such as Venezuela or Russia.

Devon Energy is similar to Apache, Bath says, with North America-based assets and good potential for production and asset growth.

"Both of them are very cheap at around 11 to 12 times earnings and five times cash flow," he noted, with "good eanrings growth in a market that is still relatively expensive."

William Rutherford, president of Rutherford Investment Management, said he continues to have a positive long-term view of energy stocks.

"I like energy services in particular because with all the money the energy companies are making they need more reserves, they need more exploration and they need to service what they have," Rutherford says.

There are a number of other quality energy companies trading at reasonable valuations, says Chris Nelder, senior analyst at investment newsletter Energy and Capital, who highlights firms such as coal producer Peabody Energyand independent refiner Valero Energy, among others.

Shares of these companies, Nelder says, have "all been whacked pretty good."

"All those guys have great opportunities ahead of them," said Nelder. "They are certainly on sale right now but the market is so sketchy right now. Essentially, the bottom line is that the tide of speculative money flowed in and flowed out."

Nelder says he remains "very bullish" on offshore drillers such as Transocean and Diamond Offshore but wild market swings have made it a difficult area to invest in.

"It's like catch the falling knife out there, it's just really tough right now," he says. "In this environment with the enormous influence of hedge fund money in the energy complex, they will get bid up and down and it has nothing to do with them so it's just hard to invest."

Nelder says he has whittled down his portfolio recently and currently owns just three stocks: Valero , Raser Technologies, a geothermal electricity play, and SulphCo, which says it has developed a way to cheaply remove sulfur from heavy sour crude.

'They're Going to Jump'

"The market took them down along with everyone else but once the pressure came off a little bit they bounced right back," said Nelder. "As soon as this stuff wrings out a little bit I think they are going to jump."

Fadel Gheit, senior energy analyst at Oppenheimer, says he was also concerned with what he sees as intense speculation in energy stocks on the part of hedge funds and big investment banks.

As crude oil profit margins narrowed dramatically in late July due to rising crude prices and lower fuel prices, the analyst warned clients to expect increasing volatility. A week later, Gheit downgraded the entire oil and gas sector -- more than 20 stocks -- to "neutral" from a previous rating of "buy."

"We sent a warning signal two weeks ago to pull the plug on everyone," Gheit said in a recent phone interview. "The industry fundamentals in our view have weakened and the inventory consumption is really weaker than what it appears to be."

In the current environment, the analyst contends, big banks such as Goldman Sachs have more to do with oil prices than the oil companies themselves.

"There's tremendous speculation by not only hedge funds but by financial institutions, which have much more money to play with and have more access to information," he said.

"The world does not run without energy, we will need every source of energy we can get our hands on, but the low-hanging fruit has been picked," he said. "Ninety percent of the people in the market today are short-term oriented, they want instant gratification. That's not investing."

Peter Kang is a markets writer at CNBC.com and can be reached at peter.kang@nbcuni.com.