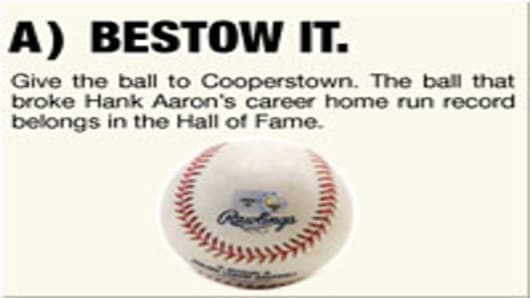 Today, we learned that the guy that spent $752,467 for Barry Bonds' home run ball No. 756 did it for publicity, or perhaps for ego sake. He's designer Marc Ecko and he's allowing fans to vote (www.vote756.com) on whether the ball should be sent to the Hall of Fame, branded with an asterisk and then sent to the HOF or launched on a rocket ship.

Tonight, I've learned that an Internet entrepreneur from California named Ben Padnos, is also putting Bonds home run ball No. 755--which he bought in the same auction for $186,750--up for a similar public vote. 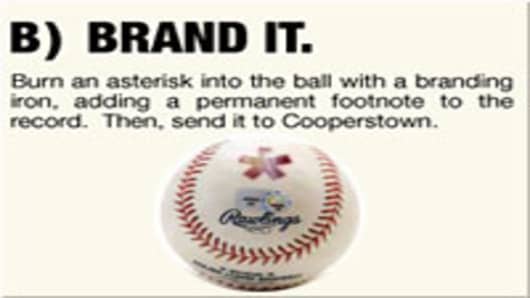 But I'm more partial to what Padnos is doing from a business perspective. On Wednesday morning, his Web site (www.endthedebate.com) will launch and unlike Ecko's site, which doesn't have any live tally going, this site will have a real-time scoreboard.

Padnos plans on making money off those who are checking in to vote or watch. He's offering 7,550 ad squares to companies at $200 per square. He, of course, only has to sell 1,000 of the squares to make a profit from the ball, which I think is feasible. Voting will stop, by the way, when Padnos is sold out of all 7,550 squares. 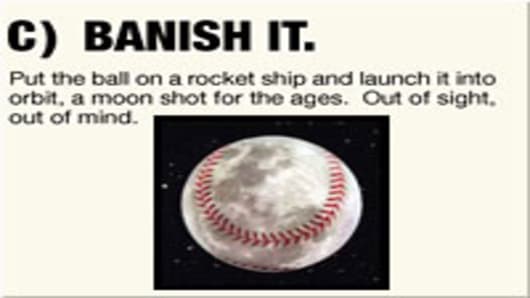 But back to the business of it all. Remember, it doesn't have to be 1,000 companies. It's basically a pixel buy. So companies and people can choose to make bigger statements than a single square.

Here's why I'm not a fan of what Ecko is doing from a business perspective. While he calls this somewhat of a test of pop culture, it's really about his name. And if this ball doesn't get launched into space, it's a waste of money.

Why, you ask? Because in a circumstance like this, people will only remember you for how it ended up. The ball could have found its way to Cooperstown without Ecko's help. Not only that, if the ball lives it can become part of someone else's story, which diminishes its place in Ecko's tale.

Harry Caray's restaurant in Chicago got plenty of publicity after buying the infamous "Steve Bartman" ball. But it got a lifetime full of credit for blowing the thing up. Well, if ESPN.com's informal poll is any indication, Ecko is in trouble. With more than 45,000 votes in, more than 80 percent want it to be sent to the Hall of Fame. Oh well, I guess that rocket would cost a lot of money too.

No matter what happens with either of these polls, it speaks volumes that both people who bought the two Bonds balls didn't care about keeping the balls themselves.