Stocks finished with small gains as investors shrugged off mixed economic data and bearish sentiment from a couple of major retailers.

"The markets are ignoring the bad news and we're still living off the Fed party from last week," said Stephen Sachs, director of trading at Rydex Investments. "The market is doing a good job of ignoring some fairly nasty housing data." 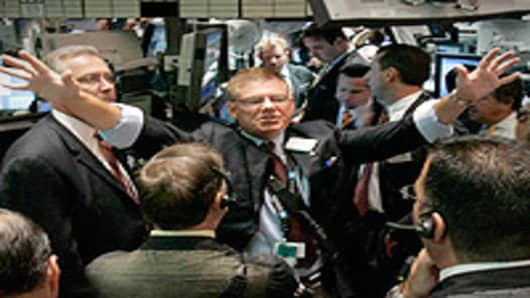 The Dow Jones Industrial Average closed with slight gains, while the S&P 500 managed to end in positive territory after spending the majority of the session in the red. Strength in tech stocks boosted the Nasdaq Composite, which ended with gains of about 0.5%.

A decline in U.S. crude futures below $80 a barrel was offset by a profit warning from home improvement retailer Lowe's, and a lower forecast for monthly same-store sales from Target.

Meanwhile, the National Association of Realtors said sales of existing homes fell for a sixth straight month in August to the lowest point in five years, and the Conference Board said its Consumer Confidence Index for September fell to its lowest in almost two years.

"Most of the economic numbers were a shade better than people expected," said Tom Schrader, managing director of US listed trading at Stifel Nicolaus. "Existing home sales were a touch better than most people were expecting, and they revised the consumer confidence numbers higher."

Shares of automakers were pressured by a nationwide strike at General Motors , estimated to result in lost production of about 12,200 vehicles per day in the United States.

Lowe's fell after the retailer said late Monday that full-year profit could fall short of its previous forecast.

Target warned on Monday that September sales at stores open at least a year would be well below its prior forecast due to weak customer traffic, particularly in Florida and the U.S. Northeast.

Merrill Lynch's subprime mortgage unit, First Franklin Financial, could cut about $100 million from the brokerage's third-quarter profit on an impairment charge, a Wall Street analyst said on Tuesday. Merrill Lynch declined to comment on the report from Sandler O'Neill.