Stocks rallied late in the session to end a seesaw trading session higher as bargain hunters stepped in despite economic concerns and worries about global credit markets.

"It seems like a little bit of a bounce back from Friday's Armageddon," said Mike Burnick, director of research at the Sovereign Society. "It's sort of a sector rotation play, investors are looking for the stronger sectors that are holding up like tech and healthcare. That may continue for awhile but you might not be able to hide if we get more down days like Friday."

"The best thing to do in this situation is do nothing," said Harry Clark, CEO of Clark Capital Management. "You can't panic and sell, any cash you have you should be buying here, a lot of good stocks have been hit and are unreasonably lower and are good buys."

The Dow Jones Industrial Average erased an intraday loss of as much 114 points, while the S&P 500 closed with similar gains. The Nasdaq Composite recovered from a brief midday slide to end with gains of more than 1%. 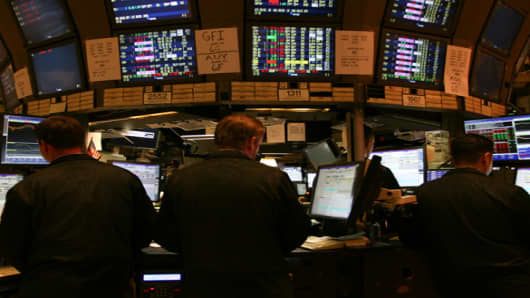 "This market has been driven down by fear and the subprime thing and the fear of the anniversary of the 1987 situation, a lot of unreasonable things here," added Clark. "The market has done nothing wrong yet; it's had a correction, it's gone down to try to close the gap for when they cut rates of two weeks ago and that's perfectly normal. So far it's okay."

The Dow shed 367 points Friday, its third-worst point loss of the year that capped off its biggest weekly fall since August. Mediocre earnings reports, a weak dollar, surging oil prices and continued worries from the credit markets sparked the sell-off. 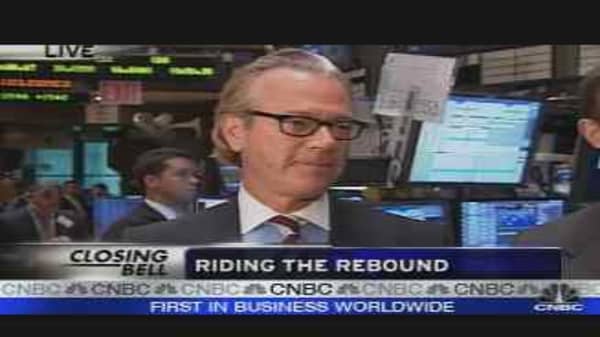 Investors Monday awaited another big round of earnings reports, with the most-watched coming from U.S. drug giant Merck and American Express .

Merck said third-quarter earnings rose sharply, helped by sales of its vaccines and cholesterol drugs, and raised its 2007 profit forecast in view of strong current trends. The Whitehouse Station, N.J.-based company posted a profit of 75 cents a share, compared with the Street consensus estimate of 69 cents a share.

Investment bank Lehman Brothers on Monday cutting its rating on the U.S. mortgage finance sector to negative from neutral.

Among those hit by the downgrade: Countrywide Financial and Washington Mutual, while American Express, as well as credit card companies Capital One Financial and Discover Financial Services , which were cut to "equal weight" from "overweight." Lehman Brothers analyst Bruce Harting said the U.S. credit downturn could result in $242 billion of mortgage-related losses. 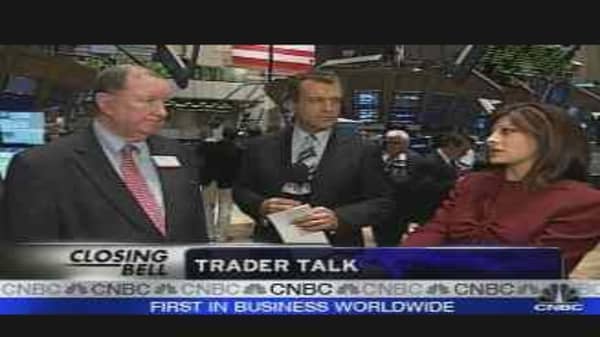 Hasbro , the second-largest U.S. toy company, posted a higher quarterly profit Monday that topped expectations, helped by sales at its Playskool brand and continued strong demand for products tied to the Transformers movie.

Wal-Mart, Bear Stearns in the News

In corporate news, Bear Stearns reported the first significant deal of the day regarding its strategic partnership with China's CITIC Securities. The two companies will take investment stakes in each other and form a broad strategic alliance.

CITIC will invest $1 billion in Bear Stearns and receive 40-year trust securities that would convert into about 6 percent of the equity in the New-York based bank. Bear Stearns, an investment bank battered by the mortgage market slump, plans to buy $1 billion of CITIC debt that would over time amount to a 2 percent stake in the Beijing-based firm.

Also, Wal-Mart Stores will spend up to 100 billion yen ($878 million) to buy out minority shareholders in Japanese supermarket unit Seiyu in an effort to turn around the loss-making chain.

In merger news, Goodman Global maker of heating, ventilation and air conditioning equipment, on Monday said it agreed to be acquired by private equity firm Hellman & Friedman for about $1.8 billion.

Texas Instruments is due to report earnings, giving investors more clues on the health of the technology sector.

Crude oil futures ended down $1.04, or 2.7 percent, to $87.56 a barrel on the New York Mercantile Exchange. Oil closed lower for the second straight session but remains up 43% year to date.

-- Reuters contributed to this report.