Japanese stocks ended nearly flat, with Nikkei 225 Average edging up just 0.07 percent despite gains by exporters such as Sony as thin trade and a lack of incentives took a toll. Buying emerged on a sense that the market had fallen too far on Monday, when the Nikkei lost more than 500 points, but rises were limited as market participants awaited a flood of Japanese corporate earnings and U.S. economic data reports later this week. 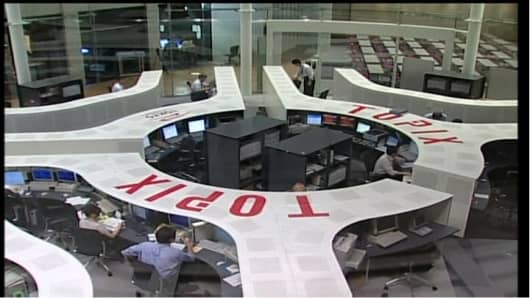 Australian shares rose 1 percent, as investors sought bargains in financial firms such as Macquarie Bank and major banks, which had been sold off in the previous two sessions. Goldminex Resources made a sparkling trading debut, rising as much as 40 percent above its issue price of A$0.75.

Chinese stocks bucked the region's advance throughout most of the session and traded lower, but then rebounded ahead of the close to end 1.9 percent in the green.