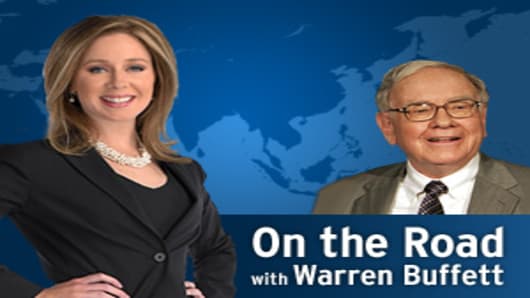 CNBC's Becky Quick traveled exclusively with Warren Buffett on a whirlwind tour of China and South Korea. All this morning on Squawk Box, she is reporting in-depth on the trip and what it tells us about Buffett's investment philosophy.

In this video clip from their plane ride to China, Buffett shows us what's in his wallet, including a special card entitling him to some fine dining in Omaha.

Warren: I won't show you everything. I guess I've got, about, maybe 600 dollars in here. Here is a 50 dollar bill from a bank we owned in Rockford, Illinois and if you look at it, down in the bottom it is signed by the fella who ran the bank for me. They issued their own currency, so I carry that around for good luck.

And, ah, here we have my McDonald's card which lets me eat free at any McDonald's in Omaha for the rest of my life. So that's why the Buffett family has Christmas dinner at McDonald's. It explains a lot of thing. (Laughs.)

Becky: Does anyone else have one of those cards?

Warren: There's just a few of them. Bill Gates has one. His is good throughout the world, I guess. Mine is only good in Omaha, but I never leave Omaha so mine is just as good as his.

Becky: Who doesn't have one?

Warren: Well, I think President Clinton wanted one very badly, but I don't think he has one. I think he has to go to McDonald's with me.

And let's see what else we have. A few credit cards. Here I've got pictures of my grandchildren when they were young, and there are my children when they were young, and I keep those with me. And really there's not a whole lot more .. a driver's license, and as you can see, the billfold is about thirty years old and it's only been out a few times during that period. Often moths come out when I pull out my billfold.