Banks May Not Get Much Relief From Lower Rates

The Fed's decision to cut interest rates probably won't do much for banks struggling with rising credit losses as the housing market retreats.

The Fed's decision to cut its key overnight lending rate to 4.50 percent from 4.75 percent will lower a variety of rates pegged to short-term market rates, such as those on credit cards and home equity lines of credit. It may also allow banks to lower rates on deposits. 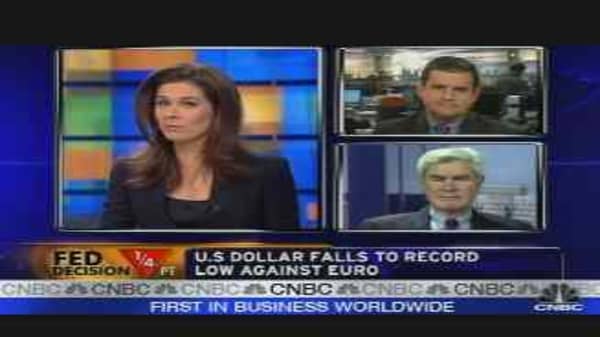 Yet because rate cuts typically take six months to work into the economy, according to economists, Wednesday's rate cut and even the Fed's half-point cut in September will need time to have their full effect.

"The challenges remain the same: There is weakness in the housing market and a possible contagion effect harming other consumer lending, including credit cards and auto loans," said Rodrigo Quintanilla, head of North American banks and broker-dealers for credit rating agency Standard & Poor's.

No 'Cure' for Past Mistakes

Banks have been among the worst-performing U.S. equity sectors this year. Through Tuesday, the S&P Financials index was down 9.4 percent in 2007, compared with a 7.9 percent gain in the S&P 500.

Financial stocks comprise one-fifth of the S&P 500. Some, including mortgage lender Countrywide Financial, have slid more than half.

But the Fed said this rate will likely slow, "partly reflecting the intensification of the housing correction."

"Rate cuts don't cure past mistakes," said Gary Townsend, a banking analyst at Friedman Billings Ramsey & Co. in Arlington, Va. "To the extent banks have not lent wisely, such as in subprime mortgages or some residential construction in Florida, those loans may already be bad now."

Moreover, some banks, including Citigroup, Bank of America and Wachovia, have large capital market exposures, and were hurt this summer when that market seized up.

Morgan Stanley's Betsy Graseck on Wednesday downgraded the sector to "cautious" from "attractive," and projected a "consumer credit recession" in 2008. She also downgraded Citigroup, Bank of America and Wells Fargo.

"We expect significant deterioration as tighter credit standards, imposed by banks and capital markets, squeeze consumers and as unemployment rises and housing values fall," Graseck wrote. "We see further downside risk to earnings per share if a consumer credit recession spills into corporates."

On top of this, banks such as BB&T in the southeast and Commerce Bancorp in the mid-Atlantic have lamented growing competition for deposits.

Countrywide Bank, for example, Wednesday offered a 5.65 percent yield on a $10,000, six-month certificate of deposit.

This exacerbates the negative impact from a fairly "flat yield curve," where long-term Treasurys yield little more than short-term Treasuries. That hurts banks because they can't charge enough on loans to offset borrowing and deposit costs.

But he said investors should be "very worried" about the potential for dividend cuts.

Many bank stocks now yield more than 5 percent. Townsend's colleague Paul Miller has said Washington Mutual, the largest U.S. thrift, may have trouble maintaining its dividend, which on Tuesday threw off an 8 percent yield.