Airbus parent EADS acknowledged on Thursday its controversial restructuring plans were inadequate to cope with the dollar's "unbearable" slide, as delays in a major military project pushed it to a deeper quarterly loss.

A slump in the dollar to fresh lows against the euro means Europe's largest aerospace group will have to find 1 billion euros in new savings between now and 2010-11, its top executive said, but he declined to say whether that meant more job cuts.

Unions warned of difficult negotiations over any addition to the 10,000 job cuts already planned under "Power8" restructuring at Airbus, which caused a stir in France and Germany this year.

EADS has been rocked by delays to its A380 superjumbo, which drove planemaker subsidiary Airbus into loss last year, and complains the weak dollar favors Boeing .

Most recently, it was forced to push back another major project, the A400M military airlifter, by six to 12 months.

The move triggered a 1.37 billion euro charge in the third quarter, helping to push EADS to a bigger-than-expected third-quarter operating loss of 710 million euros. Net losses widened to 776 million euros from 189 million a year ago.

EADS also cut its 2007 operating profit target by 400 million euros to "roughly breakeven" but investors took that as a signal to buy back shares sold off recently on the A400M woes.

EADS shares were up 4 percent at 22.42 euros at midsession.

"They didn't cut forecasts as much as expected," said one London-based brokerage analyst who said that accounted for some of the rise in EADS shares. "Pricing pressure (on Airbus plane sales) was also not as bad as expected."

There have been fears of a dent in aircraft prices following a prolonged peak in the aircraft industry's cycle and the psychological impact on airlines of near-$100 oil. 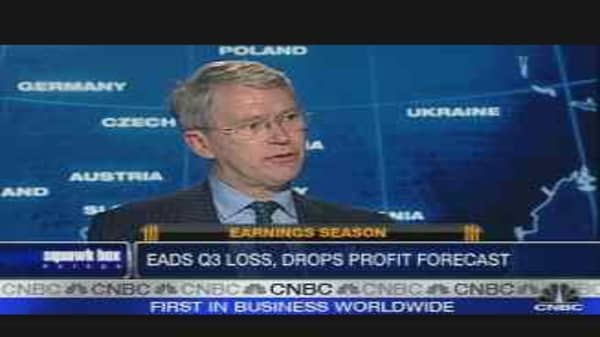 Analysts were on average looking for third-quarter revenue of 8.1 billion euros, an operating loss of 382 million and a net loss of 196 million, according to Reuters Estimates.

Chief Executive Louis Gallois said Airbus was doing better than expected at producing 2007 savings and maintaining its aircraft prices. But he cranked up rhetoric on the dollar.

"It's becoming unbearable," he told a French radio station. "We have to review Power8, we have to apply Power8 and take additional measures ... We have to react to this slide in the dollar ... We must find additional savings of roughly 1 billion euros by 2010, 2011," Gallois told BFM radio.

He agreed with French President Nicolas Sarkozy who warned in the United States that the dollar's slide could provoke a trade war. And he told analysts the U.S. currency's roughly six-year drift against the euro may still not be over.

Power8 was launched last year in the wake of the A380 delays and to make Airbus more competitive despite a weak dollar. But although it involves 10,000 job cuts in four countries, it was drawn up when the euro was at $1.35 and already looks fragile.

The euro is now above $1.46 and EADS says such a gap of 10-11 cents can gouge 1 billion euros a year from operating income.

"With the announcement of another billion euros in cuts we have a right to be worried and we are," Gilbert Plo of the CFTC trade union told Reuters.

EADS is meanwhile heading for a scrap with some of its biggest suppliers after promising to hold Europe's top aircraft engine makers to account for the delays to the A400M.

Unlike a two-year delivery delay in the A380 superjumbo, which is seen as strictly the fault of cross-border divisions and bad management within Airbus, EADS says the A400M problems stem from the huge turbo-prop engines built outside its plants.

"We think we are not the only ones responsible and we have to look at that very carefully with our customers and partners and suppliers," Gallois told analysts in a conference call.

He demanded an audit of the engine and said he had asked a consortium led by engine makers Rolls Royce and Safran to provide a new timetable by end-November.

He did not rule out legal action, saying, "perhaps one day we will have to talk about more contractual questions."