Stocks On The Move: Monsanto, McDonald's...

Following are the day’s biggest winners and losers. Find out why shares of Monsanto (MON) and McDonald's (MCD) popped while PetroChina (PTR) and Oracle (ORCL) dropped. 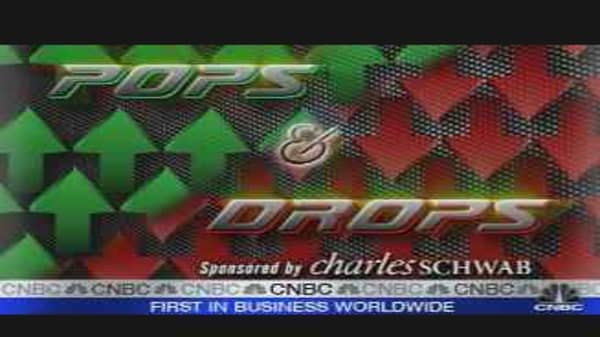 McDonald's (MCD) popped 2%. The world's largest restaurant chain said October comps were up 7% on sales of cinnamon rolls and coffee in the U.S. and chicken snack wraps in Europe. – Karen Finerman recommended MCD and YUM as buys.

Ford (F) popped 3%. A rollercoaster ride for Ford which jumped higher at the open on earnings - than sank lower mid-afternoon - only to rally all the way back by the close.

Water. In the first Bush veto override, the U.S. Senate voted overwhelmingly in favor of a $23 billion water infrastructure bill.

Mobile Telesystems (MBT) popped 9% and VimpelCom (VIP) popped 8%. Deutsche Bank raised its price targets for Mobile TeleSystems and competitor VimpelCom after forecasting that Russian mobile subscribers will spend $20 a month in the long term, up from a previous forecast of $13 per month. – Tim Seymour called these stocks an oasis in consumer staples.

Restoration Hardware (RSTO) popped 140%. In what might be the most dramatic pop ever featured on Fast Money, high-end home furnishing retailer Restoration Hardware agreed to go private for $267 Million. It’s worth noting shares were down 70% year to date before the pop.

PetroChina (PTR) dropped 6%. The Chinese oil giant recently surpassed Exxon as the world's largest company - but it appears to be having some growing pains. – Tim Seymour felt that this trade was broken.

Oracle (ORCL) dropped 8%. So much for Goldman's "Conviction Buy" list; after being added to the venerable roster on Monday, Oracle dropped today following Cisco and the rest of tech down the tubes. – Guy Adami recommended buying ORCL for a trade.

EMC (EMC) dropped 7%. The tech darling became another one of Thursday’s tech casualties, and slid lower.