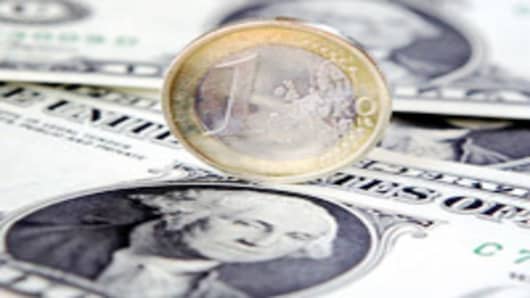 Another prominent theme in the market was the rebound in investors' willingness to take bigger risks for a higher return.

Earlier this week, nervousness about the difficult lending environment caused the yen to surge across the board, rising to an 18-month high against the dollar as investors unwound carry trades, in which a low-yielding currency such as the yen is borrowed to fund purchases of higher-yielding ones.

But by Wednesday carry trades were being put back on. The euro gained 0.9 percent to 163.37 yen, pulling away from a two-month low of 158.66 yen hit on Tuesday.

The Australian dollar , often a target of carry traders because of its relatively high interest rate, rose 0.2 percent against the greenback to $0.8975, though it was well off a 23-year high of $0.9401 reached last week.

"The recent rise in risk aversion reflects the broadly anticipated aftershock in the financial sector of the liquidity crisis earthquake of August," said Michael Woolfolk, senior currency strategist with Bank of New York Mellon. "Risk aversion is likely to abate as incoming data reflect ongoing consumer spending," he said in a note.

Sterling fell against the euro after the Bank of England's Quarterly Inflation Report signaled that the benchmark interest rate would need to be cut in the future. The euro climbed to a four-year high against the pound at 71.36 pence.

Thus far, global growth has held up fairly well outside the United States, but the report added to uncertainty about global economic growth in the wake of this summer's crisis stemming from the U.S. subprime mortgage market.

A report earlier on Wednesday showed euro zone economic growth rebounded more than expected in the third quarter, but economists expected a slowdown in the current quarter would keep the European Central Bank on hold.