Oil Closes Above $95 Amid Supply Concerns

Oil prices rose to close above $95 per barrel Friday, amid expectations that global crude supplies will remain tight, despite a U.S. oil inventory report that showed a surprising increase in domestic crude stockpiles. 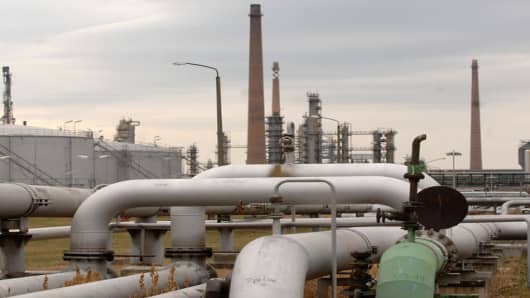 U.S. light, sweet crude for December delivery rose to settle up $1.67 at $95.10 per barrel on the Nymex. The contract expires at the end of today.

Some analysts attributed volatility in the market to the expiration of the December contract.

"Price direction should remain dominated today by the management of the expiring contract," said Olivier Jakob of Switzerland's Petromatrix.

London Brent crude futures for January added $1.40 to $91.63 a barrel on the ICE Futures exchange.

"The outlook for pricing remains strong based on tight supply-demand fundamentals," said Victor Shum, an energy analyst with Purvin & Gertz in Singapore. "Because of growth in developing countries, global oil demand growth is going to continue at a good pace."

The higher inventories were "largely the result of a 830,000 barrel per day increase in imports," said Vienna's PVM Oil Associates.

Petromatrix's Jakob said the level of crude imports showed "no strong impact from the Mexican weather disruptions" of weeks past.

Crude prices have been volatile this week, falling more than $3 on Tuesday and rising more than $2 on Wednesday after hitting a record of $98.62 a barrel last week. But some analysts say tight supplies and increasing demand will continue to drive prices higher.

"What's really supportive of strong pricing is that global demand growth is still exceeding supply growth, and that has eaten into the commercial inventories of consuming nations," Shum said.

The Organization of Petroleum Exporting Countries has been under pressure to ease the supply tightness, with U.S. Energy Secretary Samuel Bodman saying earlier this week that he asked OPEC to increase production.

OPEC Secretary General Abdalla Salem el-Badri was quoted as saying in a report Thursday that the group was ready to increase oil production "if that will contribute to lower the (crude) price."

The cartel also reduced its forecast for fourth-quarter demand for oil, saying it would rise 1.97 percent, down from expectations of a 2.1 percent increase a month ago. The revision was due in part to the effect high prices are having on demand.

Leaders of OPEC are to meet in the Saudi Arabian capital Riyadh on Saturday and Sunday to discuss the challenges a potential global recession, an anemic dollar and rising environmental concerns present to their near-$1.8 billion a day in revenue.

OPEC leaders are also likely to discuss the possibility of creating a currency basket to price their crude, Venezuela's oil minister said Friday.

Rafael Ramirez, the minister, said the issue will come up at a closed session in the two-day OPEC summit, Dow Jones Newswires reported.

"The issue of the currency basket...they will have an opportunity to discuss this in the closed session," Ramirez told reporters on the sidelines of the OPEC gathering.

Also Brazil said it would consider joining OPEC based on the size of the newly discovered Tupi oil field off its eastern shores, the country's ambassador to Saudi Arabia said Friday.

Isnard Penha Brasil said he was attending the OPEC summit to talk with OPEC officials and that "a membership decision will come after we know what our export capacity will be and we think this will be good."

Last week, Brazil confirmed a large offshore oil discovery and promising fields near the find, although full-scale extraction is unlikely until 2013 and will be very expensive because it is so deep.

In its monthly oil market report, OPEC said "late winter in North America along with the high price of transport fuels appears to be reducing regional oil consumption in the fourth quarter, leading to a downward revision of (100,000) barrels a day for that quarter."

Shum noted that prices were also supported by the limits of OPEC's spare capacity, which left little cover for any supply disruptions, such as the oil pipeline attack in Nigeria reported Thursday that's expected to reduce production by 50,000 barrels a day. The pipeline feeds one of Royal Dutch Shell PLC's two main oil export terminals in the nation's south.