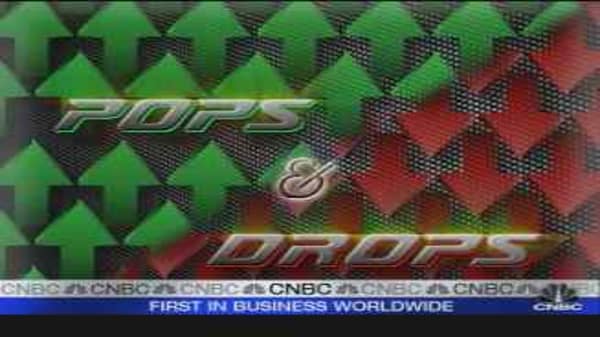 Dow Chemical (DOW) popped 6%. Kuwait agreed to buy half of Dow's plastics assets for $9.5 billion, forming a joint venture with the chemical company. – Guy Adami thinks the stock is starting to look interesting.

XM Satellite Radio (XMSR) popped 6% and Sirius Satellite Radio (SIRI) popped 4%.A Stifel Niclaus analyst said the merger will not be affected by a letter urging Attorney General Michael B. Mukasey not to rush approval.

Rigel Pharmaceuticals (RIGL) popped 224%!!!!A Phase II study of the company's rheumatoid arthritis drug reported that it reduced symptoms. – It could be a billion dollar drug, says Pete Najarian.

MoneyGram International (MGI) popped 16%. This money transfer firm got a bid from rival Euronet Worldwide for $1.65 billion in stock. That's $20 per share of MoneyGram, a 43% premium over the closing share price on Dec. 4.

Dendreon (DNDN) popped 24%.Shares of the biotech surged after three members of Congress asked for an investigation of an FDA panel's vote against the pharmaceutical company's prostate cancer drug, Provenge.

Freddie Mac (FRE) popped 7%.Freddie had an "up" day for no apparent reason, while other subprime related names were hammered.

Advanced Micro Devices (AMD) dropped 2%.AMD made "profitability" one of its 2008 New Years resolutions. The company had aimed earlier to end its losses this year. – Pete Najarian thinks at these levels they could be a takeover target.

Pepsi Bottling Group (PBG) dropped 2%.Higher plastic and aluminum costs led to a 2008 forecast below analysts' estimates. – It could be a sign of inflation Karen Finerman, speculates.

Neurocrine Biosciences (NBIX) dropped 56%.Insomnia medicine, Indiplon, would have been the company's first product on the market - but it failed to win U.S. approval. – Guy Adami is a skeptic.

Select Comfort Corp. (SCSS) dropped 36%.The maker of Sleep Number adjustable beds said Q4 revenue and profit will miss its own forecasts. – It’s too expensive for me, says Karen Finerman.

Harry Winston Diamond Corp. (HWD) dropped 6%. Diamonds are not forever, as Harry Winston Corp swung to a Q3 loss because of a foreign-exchange loss from a year-earlier profit. -