Amgen: Is It Down To "The Bone" For Investors? 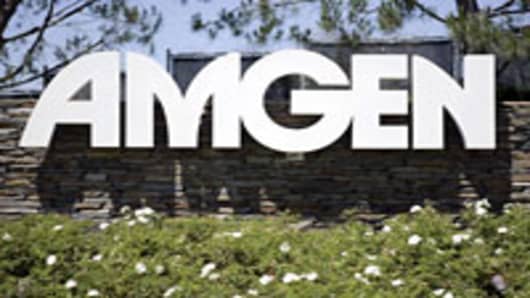 Shares of biotech behemoth Amgen are trading at a new intra-day low in the early going this morning after the company announced new data on its developmental osteoporosis drug late Friday. The Phase 3, or late-stage, study was designed to see if the twice-a-year injectable drug strengthened the bones of women with a certain type of breast cancer.

The drug goes by the name denosumab, but they've taken to calling it D-mab, for short. With all of the pressure on Amgen's bread-and-butter anemia drug franchise over safety and insurance reimbusement issues, investors are keenly focused on the D-mab test results. That's because the drug is the company's best hope to fill the depleted coffers. Osteoporosis represents a multi-billion dollar drug market and, of course, it's only expected to get even bigger as boomers age.

So, the test showed that D-mab increased bone strength by 5.5 percent. Analyst reaction, though, is mixed. Rodman & Renshaw's Mike King calls the data "impressive", but says doctors might opt for cheaper osteoporosis drugs in breast cancer patients if D-mab gets to market.

FBR's Jim Reddoch writes in a research note to clients this morning that the bigger deal will be the results of the head-to-head study comparing D-mab to Merck's blockbuster bone drug Fosamax. Those numbers are expected in the first half of next year. Leerink Swann's Bill Tanner is the most bullish titling his note, "Denosumab--white knight may be appearing on horizon". He believes "a real commercial opportunity for denosumab may exist."

But Tanner and Miller Tabak's Les Funtleyder raise the issue that many investors may want to close out the year without AMGN in their portfolios. In a note to clients Funtleyder writes, "…there could be weakness in the (biotech) sector near-term due to tax loss selling and portfolio window dressing." Sure enough, many of the big-cap biotechs--DNA, AMGN, CELG, BIIB, just to name a few--are lower this morning. R&R, FBR and Leerink make a market in AMGN.

And on a weak market morning, I wanted to point out that shares of Dow component Merckare rallying again. That's because of a potential delay of FDA approval for GlaxoSmithKline's cervical cancer vaccine, Cervarix. That means Merck's wildly successful shot, Gardasil, maintains a monopoly position for a longer-than-expected period of time. In a press release, GSK says the FDA has some questions about the vaccine which the company has already begun to answer. But it didn't specify what issues the agency has raised about Cervarix. Lucky Merck.