UK Inflation Below Forecasts in Nov.

Britain's inflation rate held steady in November, wrong footing analysts who had forecast a rise and giving the Bank of England more scope to cut interest rates should the economy weaken sharply. 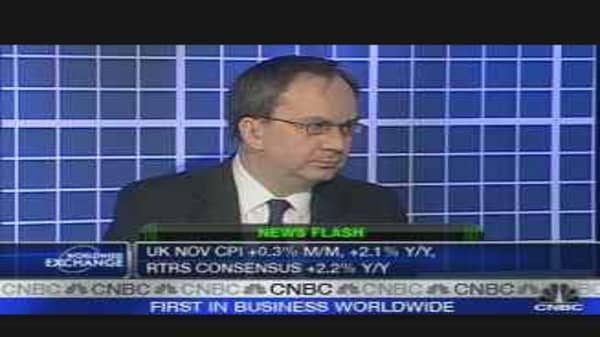 Data from the Office for National Statistics on Tuesday showed consumer prices rose 0.3 percent last month, leaving the annual rate unchanged at 2.1 percent. Analysts had forecast a rise to 2.2 percent.

The biggest upward impact came from road fuel prices with average petrol prices rising by 3.5 pence per liter over the month compared with a modest fall last year. The annual rate of inflation for fuels and lubricants was the highest in more than two years.

However, there was a downward impact from utility bills as gas and electricity prices continued to come down after huge increases last year. The annual rate of inflation for electricity and gas was the lowest since records began in January 1997 at -5.6 percent.

The Bank of England cut interest rates to 5.5 percent earlier this month and markets are pricing in at least three more quarter-point cuts over the coming year as the economy slows.

Core inflation, which excludes energy and other volatile items, fell to 1.4 percent, its lowest in a year.