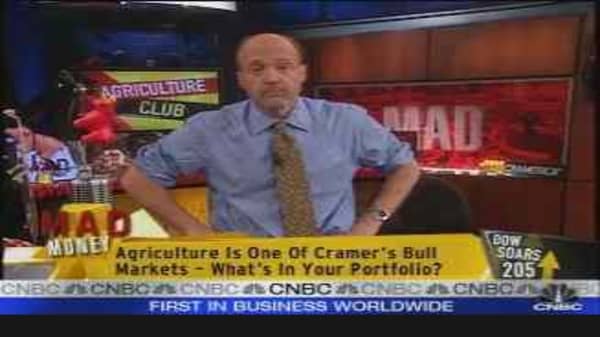 It’s no secret that Cramer is bullish on agriculture. He’s been trumpeting the sector’s success for a while now, especially that of Agrium, one of his favorite stocks.

Agrium is much lower than where Cramer thinks it should be after taking over UAP Holding , but he’s just as confident in the stock. The deal looks a lot like Freeport-McMoRan’s takeover of Phelps Dodge, he said, and because FCX is up 65% since, Cramer’s confident that Agrium will do just as well or better.

The similarity is in the stock offering that Agrium and Freeport did to raise money for their respective takeovers. Each company’s offering broke through the “print” price, the price of each deal, taking down the share price. As we said, FCX recovered, and so has Agrium a bit, but Cramer expects much more from this fertilizer company.

Prices for three fertilizer nutrients – nitrogen, phosphate and potash – are at record levels, and it doesn’t look like there will be a major supply response until 2009-2010. Two years of expensive fertilizer and pricing momentum over the next 12 to 18 months should be great for Agrium, Cramer said.

Yes, AGU has more than doubled this year, but it’s still the cheapest fertilizer stock out there, and the UAP Holding acquisition took out a key competitor. So with fewer players in the field, Agrium has the potential to score big profits.

The company might not earn investors 50 points of upside like Freeport, “but I have to believe Agrium has a whole lot higher to go,” Cramer said.