More Americans Are Walking Away From Their Homes

Increasing numbers of Americans are simply walking away from their houses and mortgages, increasing pressure on banks and the economy.

Rapid house price falls in many parts of the United States will soon leave as many as one in five borrowers owing more on their loan than the house will fetch, removing at a stroke the single most powerful incentive to keep up with payments. 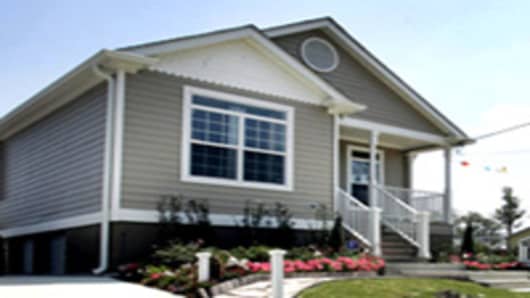 The phenomenon of "walk aways" or "jingle mail," so called because of the noise the house keys make in the envelope mailed to the bank, is hard to measure but shows every sign of gathering pace and having a substantial impact.

Wachovia went so far as to change its models on how quickly loans will go bad in the face of what it called "unprecedented" changes in consumer behaviour.

"I don't know where the tipping point is," Wachovia chief risk officer Don Truslow told analysts on a conference call. "But somewhere when a borrower crosses the 100 percent loan to value, somewhere north of that...their propensity to just default and stop paying their mortgage rises dramatically and really accelerates up. It's almost regardless of how they scored, say, on FICO or other kinds of credit characteristics."

FICO, a credit score developed by Fair Isaac , is one of many barometers of credit worthiness used in home lending to help predict the likelihood that a borrower will repay.

Wachovia this week announced that it would make a $2.8 billion provision for credit losses as it posted a first quarter loss, cut its dividend and sought to raise $7 billion in fresh capital.

While the law varies from state to state, in many parts of the United States mortgage lenders cannot go after defaulting borrowers' other assets.

And even where they can, few lenders take the expensive and low-yielding option of chasing down borrowers who walk away from loans.

The scale of the potential problem is huge.

The impact of a new wave of defaults will also be potentially important.

Banks and other investors in mortgages, as has been seen, will take further hits to their already weakened capital.

While few might shed tears for banks, this means a longer and deeper credit crunch.

It will also mean a wave of new properties hitting the real estate market, driving prices lower still, as banks seize and seek to sell the houses homeowners have fled.

To give a flavour of the impact, Zandi has estimated that every foreclosure on a neighbourhood block reduces the value of all homes on that block by almost 1.5 percent.

To be fair, not every loan default by someone whose house isn't worth as much as the loan is a walk away, but the two are closely linked.

Wachovia is far from alone in feeling the impact from "walk aways."

Regions Financial , a large U.S. bank active in the southeast, on Tuesday announced that nonperforming assets had nearly tripled to $1.2 billion, driven in part by deterioration in its home equity loan portfolio.

"As they started to sell it or refinance, they realized that valuation was 40 percent below what it was that 18-24 months ago and they are walking away from those homes in those markets," he said.

Data from real estate firm RealtyTrac not only shows a rapid rise in overall foreclosures, but also suggests a rising number of walk aways.

Home foreclosure filings surged 57 percent in the 12 months to March and bank repossessions soared 129 percent from a year ago, according to RealtyTrac.

In most of the United States, foreclosures follow a sequence of an initial notice of default, then notice of a scheduled auction, and finally a "REO" filing indicating repossession.