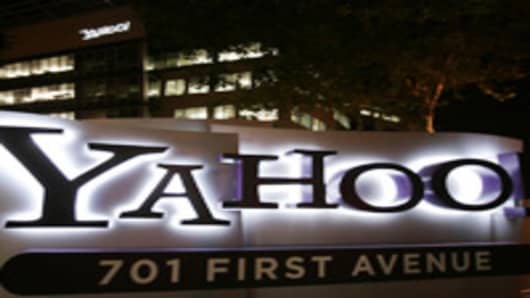 There's about $41 billion in chips on the table, all the cards have been dealt in the Yahoo vs. Microsoft poker match -- and today is the day Microsoft and investors get to "call."

Yahoo's been holding its cards close to the vest, raising the stakes by raising questions over just how successful and profitable this company really is -- and really can be.

Which means when the Web portal company puts its financial cards on the table later today with its first-quarter earnings report, we'll know whether Yahoo's been merely playing a great hand, or whether its cards will betray its poker face.

Yahoo is in a precarious position: it has to at least meet -- though some say it must beat -- Wall Street expectations, if it expects to have any leverage left in lifting the Microsoft bid. Lifting the bid is something Microsoft has said all along that it needn't do, because the original offer was such a significant premium to begin with.

If the company meets and offers a rosy forecast, as it has already done with Wall Street analysts soon after the Microsoft bid was made, that could spur Microsoft to raise its bid since the perception would be that Yahoo might be more valuable than was thought. Same goes if Yahoo beats expectations. Yahoo's in a world of hurt, though, if the company disappoints, especially after those rosy Wall Street comments.

Analysts today will be looking for Yahoo to report first-quarter earnings per share of 9 cents on $1.33 billion. Citigroup is looking for 11 cents; but more importantly, analyst Mark Mahaney tells me, is the outlook.

If the company adds new details about its optimistic outlook for the rest of the year, Mahaney says that could have a "material impact" on the Microsoft bid. For guidance, the Street consensus is 11 cents a share on $1.37 billion during the second quarter, and 44 cents on $5.62 billion for the full year. Also, commentary today about Yahoo's evolving ad partnership with Google will be closely watched.

There's a lot of discussion that Microsoft would raise its bid by as much as 10 percent, something Microsoft has steadfastly said it wouldn't do, doesn't need to do, and won't do, according to comments made just this morning by Chief Executive Steve Ballmer.

Ballmer says today's numbers will not affect the Microsoft offer. Period. Why?

Never mind that the bid wasn't so significantly higher based on where Yahoo's shares used to trade just a couple of months before Microsoft made it; what matters is that Microsoft's bid was 62 percent ahead of where the shares traded just a couple of days before it made the offer.

Microsoft didn't drive Yahoo shares lower, only to swoop in with an offer after the fact. Yahoo drove its own shares down by paralyzed management and the inability to compete with Google in the marketplace. Microsoft waited for Yahoo to show signs of dying on the vine, and then came in to pick off the grapes.

You don't fault homebuyers today enjoying a buyers' market and making low-ball offers for the homes of their dreams; and we shouldn't fault Microsoft for doing the same thing with Yahoo. And I'd make the argument that Microsoft could've made a far lower offer for Yahoo and it would have been just as attractive.

Still, if Microsoft wants to raise its bid, but doesn't want to shell out the additional cash, that's where News Corp.'s Rupert Murdoch might step in. He reiterated just yesterday that he wouldn't offer a competing bid to Microsoft, but he's not dismissing a joint bid in partnership with Microsoft.

Murdoch is on the wires as saying during a Washington, D.C. conference yesterday, "Is Google really going to get control of the advertising world, and should Microsoft be supported in their attempt to try and stop that?"

So that should alleviate Microsoft's concerns, as well as its shareholders, that the company would pay too much for Yahoo. Will the deal get done by Friday -- since Saturday is the deadline? Credit Suisse's Heath Terry says no way, and that the proxy war will stretch into July. Cowen's Jim Friedland says he thinks the deal will happen, but isn't convinced the deal is necessarily a good idea for either company.

Either way, as Microsoft and Yahoo duke it out, and then face the daunting, Herculean task of trying to integrate two tech companies on opposite ends of the cultural spectrum, Google continues to laugh its way all to the bank.

In fact, Google could not have asked for a better scenario had the company scripted this drama itself. Kinda like the other player at the table, holding four of a kind, watching two other players raising each other, and knowing no matter what they do, its got the winning hand, ready to reach in and grab all the chips. Nice place to be.