U.S. consumer confidence fell to a five-year low this month as Americans confronted the grimmest jobs outlook since late 2004, while data also showed a record drop in home prices in February.

Contributing to their slumping confidence in April, consumers expected that inflation would accelerate to a pace last seen in the early 1980s. 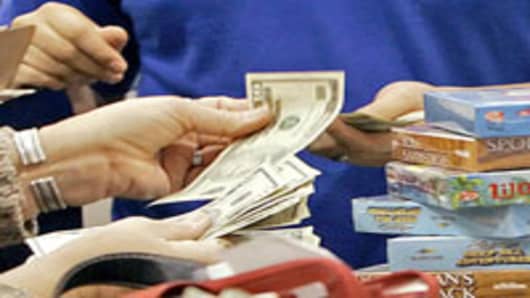 The news cemented the prevailing view that the Federal Reserve, which opened a two-day policy meeting on Tuesday, would signal an end to its aggressive campaignof lowering interest rates.

The private Conference Board's index of consumer sentiment fell to 62.3 in April, the lowest reading since March 2003, when the Iraq war was launched, from an upwardly revised 65.9 in March.

The monthly survey's gauge of inflation expectations surged to 6.8 percent from 6.1 percent in March.

It was the highest reading on inflation expectations since a matching 6.8 percent in September 2005.

"Consumers haven't been this depressed in a long time," said Chris Rupkey, senior financial economist with Bank of Tokyo-Mitsubishi in New York. "They are saying that jobs are much harder to get since the start of the year and that does not bode well for this Friday's employment data.

This is exactly what you see when we are in a recession and the labor market indicates that we are indeed in a recession, and the million dollar question is whether this decline in confidence leads them to pull back their spending." Consumer spending accounts for two-thirds of U.S. economic activity.

The drop in consumer confidence dragged on the stock market, with the Dow industrial down 0.30 percent in early afternoon.

Contributing to the picture of U.S. economic weakness, a key gauge of the housing sector showed no signs of an end to the sector's worst slump in a generation.

Prices of existing U.S. single-family homes extended their slide in February, falling 2.6 percent to 175.94 in February from the previous month for an annual decline of 12.7 percent., according to the Standard & Poor's/Case Shiller home price index.

In addition, U.S. home foreclosure filings jumped 23 percent in the first three monthsof the year from the last quarter of 2007, and more than doubled from a year earlier, as more overextended borrowers failed to make timely payments, real estate data firm RealtyTrac said on Tuesday.

U.S. President Bush on Tuesday acknowledged the weak economic tone. "It's a tough time for our economy. Across our country, many Americans are understandably anxious about issues affecting their pocketbook, from gas and food prices to mortgage and tuition bills," Bush told a news conference.

The day's data makes difficult reading for the Federal Reserve.

The U.S. central bank is seen eager to halt the interest rate cuts it has made to shore up the economy since price pressures have remained strong.

The Fed, which has slashed its benchmark rate by 3 percentage points since last September, is widely expected to cut rates by a modest quarter percentage point at the end of its two-day meeting on Wednesday.

The greenback has been helped by expectations the Fed will signal an end to its interest rate cuts when the policy meeting ends.

Government bonds, which usually benefit from signs of economic weakness, posted modest gains on the day.

Bill Gross, the manager of Pacific Investment Management Co., the world's biggest bond fund known as Pimco, warned that additional rates cuts by the Fed could cause harm by weakening the dollar further and stocking inflation.

Gross, in his May Investment Outlook letter on the company's website, warned investors against jumping to the conclusion that the bloodshed in financial markets is over.

Economists had expected the consumer confidence index to fall more sharply to 62.0, according to a median forecast in a poll by Reuters.

In the housing market, 17 of the 20 metropolitan regions measured posted record annual declines, according to the Standard & Poor's/Case Shiller home price index.

"There is no sign of a bottom in the numbers," David Blitzer, chairman of the index committee at S&P, said in a press release.

Eight of the top 20 metro areas, as well as both composite measures, had their biggest monthly declines in February, S&P said in the release.

Also on Tuesday, Countrywide Financial Corp, the largest U.S. mortgage lender, posted a surprisingly large first-quarter loss as it took more than $3 billion of charges for write-downs and bad loans as the housing slump deepens.

The plummeting housing market was a key factor weighing on sentiment in last Friday's Reuters/University of Michigan gauge of consumer sentiment, which hit its weakest level in 26 years.

Worries over jobs and inflation have been common themes in the Michigan and other consumer gauges.

The Conference Board's measure of inflation expectations marked the highest reading since a matching 6.8 percent in September 2005 in the aftermath of Hurricane Katrina, which briefly sent energy prices soaring.

Food and energy prices in recent months have remained stubbornly high amid a global boom in commodities and a weak U.S. dollar.

The Conference Board's gauges of consumer concerns about the job market were at their worst since autumn of 2004.