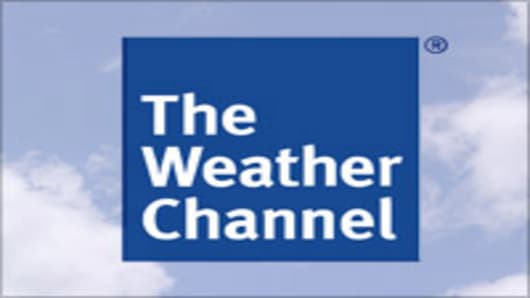 Bids for the channel were due Friday night, with a number of the media giants reportedly jumping in, and we could have news of a winner as soon as next week.

And despite reports that a consortium of NBC Universal, Blackstone Group and Bain Capital are in the lead, sources close to the bidding say that talk of a frontrunner is premature.

The cable network that reaches 96 million U.S. homes could end up in the hands of any combination of the aforementioned, or Time Warner . CBS was also considered a potential buyer, until CBS bought CNET.

Though the Weather Channel's owner, Landmark Communications, was originally looking for $5 billion for the asset, which includes mobile and online, now the bids are coming in at some $3.5 billion in stock and debt. Bankers telling me that the number has come down with the turmoil in the credit markets.

So what's Weather Channel worth? For one thing, it's one of the last remaining independent cable assets at a time where cable channels are the strongest drivers of media giants' growth. The other factor making the Weather Channel appealing is its position as a strong "vertical" brand--media-speak for a go-to destination that transcends the TV format to also draw users on the web or on your mobile phone.

We'll be watching for more news on the bidding. In this environment it'll be interesting to see who pays what.