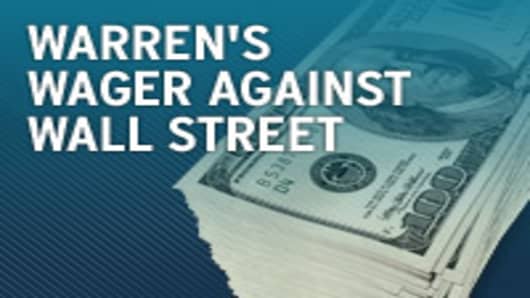 Warren Buffett is putting real money on the line, about $320,000 from his own pocket, in a 10-year bet to back his long-held argument that "experts" don't do better than the stock market as a whole. That's the basis of his belief the fees that "helpers" charge investors usually aren't justified.

This morning, Carol Loomis of Fortune Magazine, Buffett's friend and editor of his annual letters to shareholders, reveals in a piece headlined Buffett's Big Bet that the Omaha billionaire was an official wager going with Protégé Partners LLC of New York City.

That New York City firm runs funds of hedge funds. As Loomis puts it, Protégé's "existence rests on its ability to put its clients' money into the best hedge funds and keep it out of the underperformers."

Here's the bet, which Loomis says hasn't been reported before but has been in existence since the beginning of this year:

"Protégé has placed its bet on five funds of hedge funds - specifically, the averaged returns that those vehicles deliver net of all fees, costs, and expenses. On the other side, Buffett ... has bet that the returns from a low-cost S&P 500 index fund sold by Vanguard will beat the results delivered by the five funds that Protégé has selected."

Both Buffett and Protégé (the firm, not the funds) have contributed $320,000 to buy a zero-coupon Treasury bond that will cash out at $1 million when the wager concludes in 2018.

The money goes to the winner's designated charity. It's Girl's Inc. of Omaha if Buffett wins (daughter Susan is on the board) and London-based Absolute Return for Kids if Protege wins.

In the meantime, the bond will be held by San Francisco's Long Now Foundation which tries to "encourage long-term thinking and combat what one of its founders, Stewart Brand (of the Whole Earth Catalog), calls the 'pathologically short attention span' that seems to afflict the world." Its web-site lists a number of other long-term bets to benefit charities, although this one is by far the biggest. (Arguments from both sides are included on a page that also allows users to vote for one side or the other.)

While the five funds picked by Protégé will remain a secret to the public, we will get a scorecard update each May at the Berkshire Hathaway annual meeting.

As Loomis points out, due to the large fees hedge fund investors pay for the privilege of access to the experts' advice, "For Protégé to win this bet, the five funds of funds it has picked must do much, much better that the S&P."

Buffett puts his chances of winning at just 60 percent, "which he grants is less of an edge than he usually likes to have."

Protégé's Ted Seides, the 37-year-old who initiated the wager in response to Buffett's repeated challenges, knows he's up against a man who doesn't usually lose his bets.

The bright side: "Fortunately for us, we're betting against the S&P's performance, not Buffett's."

See Warren Buffett Watch on CNBC's The Call, most weekday mornings at 11:50a ET