Sorry, No Hotel Voucher, Sleep in the Terminal!

Sleeping at an airport overnight, once almost a sport for the young and short of cash, has become a lot more common lately, affecting even older and professional travelers. And a big reason is that airlines are no longer as free with complimentary hotel vouchers as they once were. 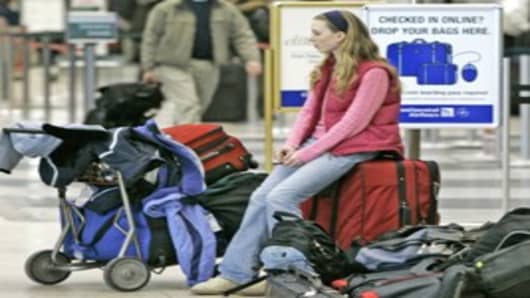 “Belt tightening by airlines over the last 18 months, and more so this year,” is how Randy Petersen, editor of the online magazine InsideFlyer and the frequent-flier Web site FlyerTalk.com, explains it.

“They have to look at everything they spend a penny on,” Mr. Petersen said. And because flights are fuller, he added, “they’re not just dealing with a few passengers.”

Bob Harrell, founder of Harrell Associates, an airline consultant, agreed. “If they’re charging for extra bags, food and water, then the flip side is the airlines are going to go out of their way to minimize expenses on one side, while maximizing on the other,” he said.

Sleeping overnight in airport has become enough of a phenomenon that it has inspired one recent novel, “Dear American Airlines.” The author, Jonathan Miles, said he was spurred to write the book after an unscheduled overnight stay at O’Hare International Airport in Chicago.

An unscheduled overnight stay at a German airport inspired one business traveler, Frank Giotto, the president of Fiber Instrument Sales in Oriskany, N.Y., to create the Mini Motel, a one-person tent complete with air mattress, pillow, reading light, alarm clock and pillow (which he now sells for $39.95).

Asked what airports would think of a tent city of his Mini Motels, Mr. Giotto expressed confidence.

“People sleeping in chairs don’t seem to bother them,” he said. “We could be forcing the airports to come up with a solution to respond to the tremendous need.”

And there is even a Web site, the Budget Traveller’s Guide to Sleeping in Airports (www.sleepinginairports.com), which lists the best and worst airports to spend the night in.

For those who do get stuck, advice from seasoned travelers boils down to this: Bring or buy a snack and water before airport shops close, bring reading material or music and something soft to lie down on or rest your head against and keep hotel phone numbers or certain Web site addresses handy.

Ron Flavin, a business traveler, recalled a flight after meeting with a client in Detroit. He said he landed at Hartsfield-Jackson International Airport in Atlanta about 1:45 a.m. for a layover, after his flight was diverted by thunderstorms.

He was rebooked on a morning flight home to West Palm Beach, but Delta Air Lines offered no hotel or meal vouchers, he said. So he curled up under a phone booth behind a counter, and slept on the floor with a pillow and blanket from his business-class seat, in the company of many other passengers.

“It wasn’t worth investing the money, time and effort to make all the phone calls and get settled in a hotel,” said Mr. Flavin, a partner in a marketing firm for beauty and health products. “I’m not a greedy guy, but there was no gesture of any kind or a sympathetic ear. I didn’t even have a toothbrush or toothpaste.”

Even though they were never required to, airlines used to give stranded passengers vouchers for rooms and meals if a flight was canceled or delayed as a result of mechanical problem or some other issue of an airline’s own making, but not for weather-related delays. Now, though, vouchers are a thing of the past.

Joe Brancatelli, editor of JoeSentMe.com, a business travel Web site, disputes the idea that sleeping in the airport ever trumps a good cheap hotel, and says that arguing with airline employees for hotel vouchers is a waste of time and energy. “Take some responsibility, and don’t wait for the airline to do for you,” he said. “Do for yourself.”

He suggested buying an airline club membership or a day pass for up to $50 for a comfortable armchair with free snacks, beverages and a television. But most airline clubs close by 10 p.m.

Another suggestion from Mr. Brancatelli: keep the toll-free numbers of hotel chains handy and pay for a room. “What is your time and productivity worth, and what price do you put on a bed, shower and couple hours of sleep?” he asked.

Airports range widely in what they offer overnight guests. The top-ranked airport at the Guide to Sleeping in Airports Web site for the last 10 years is Singapore Changi Airport. It has dimly lighted napping areas, where comfortable leather chairs have leg rests and headrests. Some are even fitted with alarm clocks. There are also cheap sleeping cubicles available for travelers.