If you are counting the days until the next payday comes around, you’re not alone.

And we're not talking Jane and Joe Six Pack here. 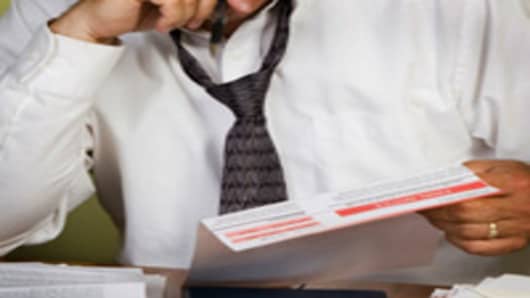 Some 21 percent of those with salaries of $100,000 or more say they are living paycheck to paycheck, according to a recent survey conducted by CareerBuilder.com.

While experts are quick to acknowledge that high gasoline prices, the slumping housing market and a generally weak economy are weighing on consumers' finances, they also agree that the general difficulty in making ends meet is also the result of persistently bad spending and saving habits that are now catching up with the spendthrift American.

"Unquestionably, more people are living paycheck to paycheck now than 12 months ago,” says Ken Goldstein an economist at the Conference Board. "Americans have never been big savers under any economic circumstance or condition."

The amount of money Americans save has been declining for decades. Most recently, the personal savings rate was 1.2 percent of after-tax income, according to the Bureau of Economic Analysis. A couple years ago, the rate was actually negative, meaning consumers were dipping into savings to cover expenses. One-in-ten workers making more than $100,000 say they put no money in a savings account each month, according to the CareerBuilder survey. (Calculate your savings rate vs. the national average.)

While recessions and inflation are inevitable, your personal balance sheet need not be perpetually red. "The one thing you can control for a more secure long-term financial future is your savings and spending rate,” said Alyce Zollman, a financial consultant at Charles Schwab.

Here are some tips to break out of the paycheck-to-paycheck syndrome.

To cut down on unnecessary expenses, Zollman recommends tracking every dollar you spend for a month. (Spending calculator.) Use an online bank or create a spreadsheet to keep tabs and decide what expenditures you can do without. For example, eliminating one night of dining out a month can free up $50 to $100 that can be saved or invested. (Budget calculator.)

In addition to contributing to a 401(k) or a similar retirement account, Ronald T. Wilcox, a business administration professor at the Darden School of Business and author of "Whatever Happened to Thrift?", suggests opening an account that automatically withdraws funds from your paycheck and into a high-interest savings account. What's more, since the best opportunity to save more money is when you get a raise, he recommends diverting any pay increase directly into a savings or retirement account.

Stop trying to impress the neighbors. Their fancy cars and large homes may look great on the surface, said Wilcox, but there's a good chance there's a lot of financing behind them. Right now, consumers should be looking to lower their standard of living, he says, and begin living below that of their peers.

If you’re looking to buy a home, Terry Fergus, president of FSM Capital Management recommends holding off on the purchase and rent instead. (Use our calculator.)

Even in this market, he says, renting is cheaper than owning a home. By waiting longer, you can save more money for a down payment and push it up to 25-35 percent of the purchase price.

It’s a no-brainer, but it needs to be mentioned. Focus on lowering debt and stop adding to what you have. “Live off of what you have,” said Fergus. Don't run up balances on credit cards by paying the minimum; pay in full each month, avoiding costly interest and finance charges.

A number of loan calculators can help you track the costs.

One silver lining of living paycheck to paycheck might be learning to never fall into that rut again by continuing to save money.

"Once the economy does improve, and someday it will," says Goldstein, "this will wake people up and make them realize we need to be saving more money."