Are Stocks the Bargain You Think?

Some of the country’s most famous investors, including Warren Buffett and John Bogle, have started to make the case that it’s time to dive back into the stock market.

They are usually careful to add that they don’t know what stocks will do in the short term. Yet their basic message is clear enough: stocks are now cheap, irrational fears have been driving the market down lately, and people who buy today will be glad that they did.

After a day like Tuesday, when the market rose 11 percent, it’s easy to see the merits of the argument.

But there is another argument that deserves more attention than it has gotten so far. It’s the bearish argument that is based neither on fears that the country may be sliding into another depression nor on gut-level worries about the unknown. It is based on numbers and history, and it has at least as much claim on reason as the bullish argument does.

It goes something like this: Stocks are truly cheap only relative to their values over the last 20 years, a period that will go down as one of the great bubbles in history. If you take a longer view, you see that the ratio of stock prices to corporate earnings is only slightly below its long-term average. And in past economic crises — during the 1930s and 1970s — stocks fell well below their long-run average before they turned around.

To make matters worse, corporate earnings have now started to plunge, too. Assuming that they keep dropping, stocks would also need to fall to keep the price-earnings ratio at its current level.

As stocks were soaring on Tuesday afternoon, I called James Melcher to hear a dose of fact-based bearishness. Mr. Melcher is president of Balestra Capital, a hedge fund in New York, who wrote an essay for his clients two years ago that predicted the broad outlines of the financial crisis (and then arranged Balesta’s portfolio accordingly). Like the bulls, he said that no one could know what the market would do in the short term. “But to think stocks are cheap now,” he added, “is not rational.”

He went on: “In the last 20 years — and particularly in the last six or seven — you had the most massive creation of liquidity the world has ever known.” Consumers went ever deeper into debt, thanks to loose lending standards, and a shadow banking system, made up of hedge funds and investment banks, allowed Wall Street to do the same. All that debt lifted economic growth and stock returns.

“It was a nice party,” Mr. Melcher said. “The problem is that all the bills are coming due at the same time.” He thinks stocks could easily fall an additional 20 percent and maybe 35 percent before hitting bottom.

So who’s right — the bears or the bulls? The smartest people in both camps, like Mr. Melcher, Mr. Buffett and Mr. Bogle, have a healthy dose of humility about their own conclusions. And when you dig into their arguments, you find that they’re not quite as different as they first sound. But they are different, and it’s worth taking a minute to consider the numbers. 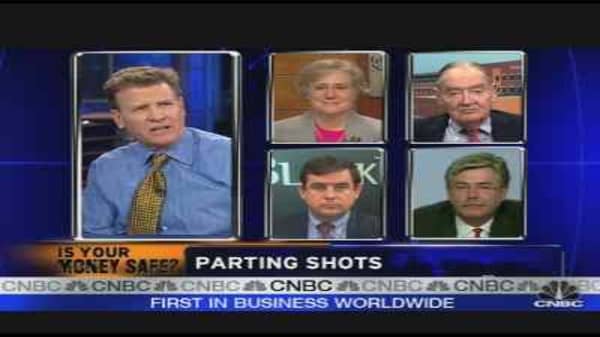 There are any number of ways to measure the valuation of the stock market. Some examine prices relative to earnings, others are based on cash flow, a company’s underlying assets or the total value of the market. But they tell a pretty consistent story right now. Stocks, which were fabulously expensive for much of the 1990s and this decade, no longer are.

My favorite measure is the one recommended by Benjamin Graham and David L. Dodd, in their classic 1934 textbook, “Security Analysis.” They urged investors to use a price-to-earnings ratio — stock prices divided by average annual corporate earnings — based on at least five years of earnings and, ideally, closer to 10. Corporate profits may rise or fall in any given year, but a share of stock is a claim on a company’s long-term earnings and should be evaluated as such.

(Why not use a forecast of future earnings? Because they tend toward the fictional, as we’re now seeing once again.)

The 10-year price-to-earnings ratio tells an incredibly consistent story over the last century. It has averaged about 16 over that time. There have been long periods when it stayed above 16 and even shot above 20, like the 1920s, 1960s and recent years. As recently as last October, when other measures suggested the market was reasonably valued, the Graham-Dodd version of the ratio was a disturbing 27. But periods in which the ratio has jumped above 20 have always been followed by steep declines and at least a decade of poor returns.

After Tuesday’s big rally, the ratio was just a shade below 16, or almost equal to its long-run average. This is a little difficult to swallow, I realize. Stocks are down 40 percent since last October, and every experience from the last 25 years suggests they now have to bounce back.

But that’s precisely the problem. Since the 1980s, stocks have always bounced back from a loss, usually reaching a high in relatively short order. As a result, the market became enormously overvalued.

As Robert Shiller, the economist who specializes in bubbles, points out, human beings tend to put too much weight on recent experiences. We think the market snapbacks of 1987 and the current decade are more meaningful and more predictive than the long slumps of the 1930s, 1940s and 1970s. Of course, anyone who made the same assumption in 1930 or 1975 — this just has to turn around soon — would have had to wait years and years until the investment paid off.

Now, Mr. Buffett, Mr. Bogle and their fellow bulls know all this history, and they’re still bullish. (Though I’d be more bullish, too, if I could get the favorable terms that Mr. Buffett did. In exchange for his money and his good name, Goldman Sachs and General Electric each guaranteed him an annual return of at least 10 percent.)

So on Tuesday afternoon, I also called Mr. Bogle, the legendary founder of the Vanguard Group, the investment firm whose low-cost index funds have made a lot for a lot of people.

He, too, prefers the 10-year price-to-earnings ratio, he said, but he didn’t think that it necessarily had to fall to the same bargain-basement levels it reached in the 1930s and 1970s.

You can certainly see why that would be the case. Investors are well aware that the market fell to irrationally low levels during past crises, and they may not allow it to become so cheap this time around.

Mr. Bogle also thinks that corporate profits will rebound nicely within a couple of years and likes the fact that interest rates are low. Low rates have often — though not always — accompanied bull markets.

But it was his last argument that I think is the main one for most investors to focus on. “I’m not looking for a great bull market,” he said. There are some reasons to be optimistic about stocks, he said, “and I also look at the alternative.”

And, really, how attractive are the alternatives? Savings accounts and money market funds will struggle to keep pace with inflation. Bonds may, as well.

Stocks, on the other hand, are paying an average dividend of about 3 percent, which is better than the interest on many savings accounts, and stocks are also almost certain to rise over the next couple of decades.

If that is your time frame — decades, rather than months or years — this will probably turn out to be a perfectly good buying opportunity. In the shorter term, though, it’s a much tougher call, and it involves a lot more risk.