Tough economic times can be the mother of invention, they can also be good breeding grounds for deception. While many tax scams have been around forever, new ones continue to pop up, especially when money is unusually precious.

So, here's a guide to the beguiling.

Debt At The Door

“Right now everyone is upside down. People are maxed out on their credit cards and everyone is looking to write-off losses or get rid of debt,” says Kevin Diamond, a CPA and Massachusetts-based tax attorney. 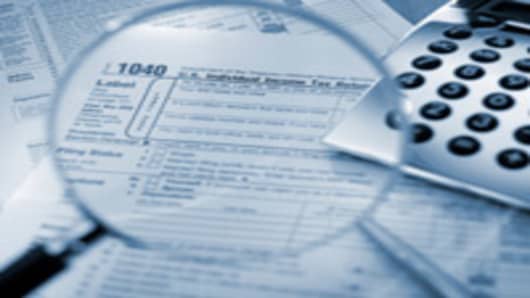 The IRS issued a problem alert urging taxpayers “to avoid getting caught up in a new tax fraud disguised as a debt payment option for credit cards or mortgage debt.”

This kind of fraud, which is also marketed as a way to reduce taxes or pay outstanding tax liabilities, according to the IRS, involves filing of Form 1099-OID, or Original Issue Discount, and/or bogus financial instruments such as bonded promissory notes.

Diamond says that by filing a form OID, scammers are likely charging a fee to taxpayers claiming they can help get them out of their debt.

Another type of fraud that is popping up, says Diamond, is based on a section of the tax code that involves deducting losses that are incurred as a result of casualty or theft.

“Because of the severe losses in the market, I think this is going to be the popular scam,” he says, adding that people will be promoting how they can help with tax losses by misapplying sections of the IRS code.

When you lose money on an investment, you can only write off $3,000 of that loss per year, unless the loss is a result of casualty—such as a natural disaster, or theft—which includes losses from actions like robbery and embezzlement.

However, according to Diamond, there are some companies that propose when you lose money in the market, they will help you write it all off in one year by characterizing it as theft.

For instance, say you lost money after buying stock in a company that was later convicted of some type of fraud. Scam promoters will charge you a fee, claiming they can help you write off the loss because there was fraud involved. The problem, however, is that to claim theft you are required to meet various criteria, and this type of loss, even when fraud is involved, does not qualify.

Other types of tax scams that people often fall for involve the establishment of trusts that claim to help defer or avoid taxes all together.

“Most of the tax scams I see involve people who fall for some sort of tax shelter,” says San Francisco-based tax attorney Robert Sommers, who adds that these shelters are often wrongly classified as private annuity trusts.

Here’s how they work: Say you bought a stock for $1,000 and your holding is now worth $1 million. If you sold the stock, you would pay taxes on it immediately. However, these scams claim that you can set up a private annuity trust that would allow you to sell the stock and not have to pay taxes until you start receiving payments from the annuity.

According to Sommers, the scam artists are promoting the idea that if you are 30 years old and don’t intend to get payments from the annuity until you turn 60, you would be able to defer taxes until then. Sommers says people pay huge fees for the "service" but the annuity payments are never made.

“I sell see a lot of ‘pure trust’ scams,” says Sommers, which are "fraudulent.”

Phishing is another popular scams that continues to gain momentum.

“Phishing is the number one thing that we have to warn consumers about this type of year,” says Alice Brooks, director of public information for the South Carolina Department of Consumer Affairs.

Phishing can take many forms but one of the most popular is when fraudsters send blast emails, claiming to be from the IRS. So-called “phishers” try to extract personal information such as your social security number, financial accounts or pin numbers, by claiming that they need more information in order to process your federal refund or tax return.

“The problem with these is that they look very official,” says Brooks, explaining that the deception often involves replicating the IRS logo. "No legitimate government organization would do this, most especially the IRS," she says.

If you think you have received a phishing email you should forward it to the IRS at phishing@irs.gov. In addition, if you want to inquire about a tax refund the best way is to contact the IRS at 1-800-829-1040.

While not a scam, Brooks says taxpayers should also avoid Refund Anticipation Loans, or RALs. These are loans for people who want to expedite their tax refund. They essentially require you to pay a fee to take out a loan on your own anticipated payout. These kind of loans are often offered at tax preparation companies and even some retail locations.

The danger, says Brooks, “is if for some reason the refund you are expecting has been garnished. When the expected refund doesn’t come in then you still owe the money.”

The IRS website provides useful information on these and other tax frauds. In addition, the website Quatloos.com is another great resource for anyone interested in finding out more information on tax scams.