Cramer's Problem With Doom and Gloom

“Enough with the hysteria,” Cramer said during Tuesday’s Mad Money, we’re not going to suffer another Great Depression. 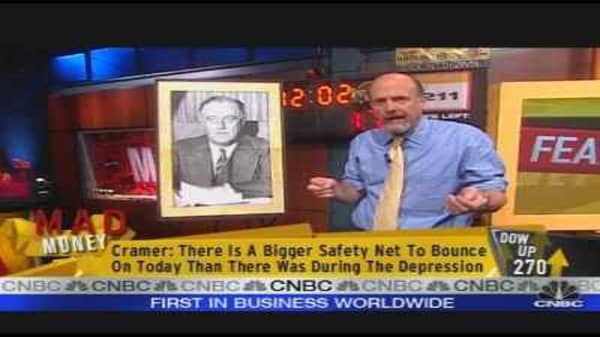 Sure, there are plenty of things to worry about: We need the European Central Bank and the Bank of England to make big interest-rate cuts. Friday’s unemployment number should be dreary. And jobless homeowners equal more foreclosures. Commercial real estate, too, is a problem. There’s also a weak China, which has all but disappeared since the Olympics. But we’re nowhere near the devastation seen 75 or more years ago.

There’s no 33% unemployment nor are we in danger of massive bank failures. Housing prices have fallen far enough to, in addition to the decline in building permits, signal a bottom by June 30 of next year, which is what Cramer’s been saying all along. Washington has taken the necessary steps to save our financial system, most recently with Citigroup , hopefully the model going forward. And with Fannie and Freddie , AIG, Lehman Brothers, Wachovia and Washington Mutual all taken care of in one way or another, so there probably are no more surprises to be had.

Another thing to keep in mind: We still have the safeguards put in place as part of the New Deal the prevent another Great Depression, like the FDIC, Social Security, unemployment insurance and the Federal Housing Authority.

So forget all the talk you’ve been hearing lately. If these talking heads wanted to worry about a Great Depression, they should have followed Cramer’s lead a few thousand Dow points ago. There are things to be concerned with – the ECB, China, etc. – but we’re not in the dire straights we were before.

One word of caution, though. This is by no means a buy call. Aside of the usual defensive names, high-yielding stocks and those trading at or near their cash, Cramer recommends you hold onto your money.