Economy May Be Worse A Year From Now: Feldstein

The US economy is likely to be in worse shape a year from now and will require aggressive government spending and intervention to stem the damage, economist Martin Feldstein told CNBC. 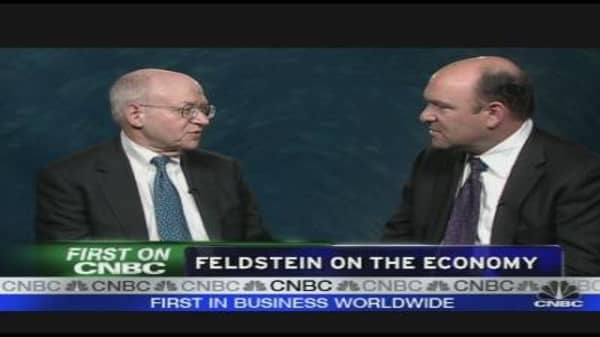 Despite conservative leanings when it comes to government intervention in the financial markets, Feldstein said the current economic downturn is the worst since the end of World War II and mandates a different approach that even goes beyond the hundreds of billions the government already has poured into the system.

"I think we'll be lucky if by this time next year we see the economy having hit the bottom and starting up, and that's still going to leave us at a very low level of economic activity even if the turn has come at that point," Feldstein said during a live interview. "But there's no guarantee that all of this put together is going to achieve that."

Government will have to change the tax structure for capital gains and corporations while also exercising caution against inflation, added Feldstein, an economist at Harvard and president emeritus of the National Bureau of Economic Research.

"We are facing an economic downturn that is worse than anything I have seen in the post-war period," Feldstein said. "American households have lost more than $10 trillion of net worth in the stock market and housing prices. They are cutting back on their spending...Where's the demand going to come from?"

He also warned against one-off programs like the stimulus checks sent out this year, noting that 85 percent of those funds went either to savings or paying down debt, and said only "long-term structural changes" will solve the economy's many woes.

But most important, he said, is helping out homeowners underwater on their mortgages. Homeowners owing more on their mortgages than their houses are worth pose a major problem, one which Feldstein said will require rewriting those loans.

"That problem needs to be tackled," Feldstein said. "If that isn't tackled, then all this fiscal stimulus alone is not going to do the job."