For Apple's Jobs, What a Difference a Week Makes

By now you know the news, that Apple CEO Steve Jobs is admitting that his health issues have not only become a serious distraction for him, his family and the Apple community, but they've also become more "complex" than Mr. Jobs had originally thought.

He'll take himself out of the day-to-day limelight of the company for the next six months, but not relinquish his role as CEO. Day-to-day management will now go to Chief Operating Officer Tim Cook, who assumed the same responsibilities when Jobs underwent surgery for pancreatic cancer back in 2004.

There will be myriad questions as to how Apple has handled this issue from the start; beginning with Jobs' gaunt appearance in public and the shroud of secrecy over all things health-related when it came to Jobs; there will be questions about how Jobs has teased the media, investors and the Apple community with passing references to his blood pressure, and citing the famous exaggerated death quote from Mark Twain after a news organization mistakenly ran his obituary. But the biggest question I have centers very much on the present.

Over these last several months, I have reported extensively on the Steve Jobs health issues: not how sick he was, because how could I possibly know without having access to his medical charts; but instead about Apple's fiduciary responsibility in releasing material news about its CEO and his ability to run the company. The threshold is quite simple: either he can run the company or he can't. If he's dying, but still running the show, technically, Apple didn't have to share any private details about his health. Legally, the company was solid. Ethically, morally, maybe not so much. But such was the tack Apple took. 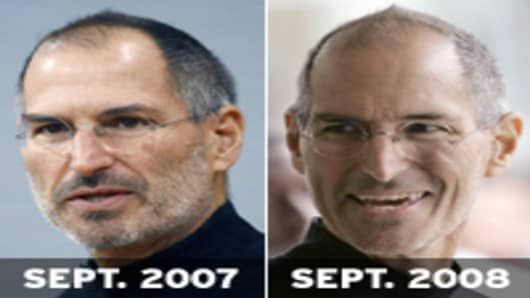 Last week, Jobs released a statement acknowledging a "hormonal imbalance" as the reason why his body remained so thin. It was only after "sophisticated" blood tests that doctors finally pinned down what was plaguing him. He said in the note then that as soon as he determined he was unable to perform his duties as CEO, he'd be the first to step forward and admit it. All along, sources (and yes, there are several) inside Apple have reassured me that Jobs was firmly in charge, executing his responsibilities, and performing his role as CEO. One source, who I have known for years, told me recently that Jobs was "fine," and that everything was under control. All of it was fine. And I stand by every word of that reporting. Even today.

What troubles me is what has transpired over the past week. Sophisticated tests showed Jobs he was suffering a hormone imbalance. And only a week later, he admits that something happened in these intervening days that showed him his health-related issues are more complex than he originally thought. Come on. Forgive my skepticism. That seems disingenuous to me at best; dishonest at worst. It's tantamount to fiduciary, ethical and financial whiplash.

The fact is, late last week I spoke to two well-known tech industry executives, both of whom are very close to Jobs, and one of whom had been speaking to Jobs regularly up until a couple of months ago. Neither has an axe to grind, and neither needs to manipulate Apple stock to make more money. Trust me when I tell you that both have plenty. What struck me was that both felt compelled to come to me to tell me that they had "serious misgivings" about the state of Jobs' health. One said, based on his contact with Jobs personally, that he was in "serious denial" about just how bad the circumstances had become. The other explained to me that he was "deeply concerned" about Jobs, and the sudden lack of communication, the non-return of emails, ignoring chat requests, unreturned phone calls was a strong indication to him that Jobs was in "dire" shape.

Both of these executives admitted that they had no direct knowledge of Jobs medical treatment. But both also said they were making their judgments based on their past relationships with Jobs, what he had told them, and how he was acting today.

I sent a very personal note to Steve Jobs about this on Monday. I didn't hear back. I did get a call from someone at Apple asking about what it was I was working on, in relation to these executives and Jobs health status. I confided in this person that if they had read my email to Jobs, they knew what I had. I informed Apple that we were going to try to gather more information, but would like to give Apple, and Jobs, a chance to come forward to respond. That was yesterday. I wanted to give it just a little more time. Apple had to be aware that if colleagues this close to Jobs were beginning to emerge from the shadows to speak to me, chances were very good that these sources and others would be talking to others as well.

I'm not saying we forced Apple's hand, but I'm sure it contributed in some small way to the release tonight, especially since it was merely a week ago when Jobs issued his other release, ending that one tersely, "So now I've said more than I wanted to say, and all that I am going to say, about this." It appears now that he wanted to say a little more before those around him began saying it for him.

For what it's worth, I believe that Jobs' health issues are a moving target, indeed hard to pin down, and that it is very likely that its status has changed and evolved since his initial diagnosis in 2004. When Jobs said he didn't know what was wrong, I think he believed it; that it was based on fact. I believe him when he says that up until recently, and only after those sophisticated tests, did doctors really understand what was wrong with him. I believed, and continue to believe, my sources who told me that Jobs was still in charge, no matter his health status.

What I'm having deep difficulty with is what has transpired this past week. Last week's note may have been true, but I'm having enormous issues believing his note this week. There's more than an air of dishonesty about it. Maybe it's because I believe he released it only after realizing there was a media missile pointed directly at Cupertino and he was trying to get out ahead of the story rather than mopping up after it. Apple's strategy about all this has been curious from the get-go. Not such a surprise when everything centers around such a mercurial guy.

I just can't help but believe that bright sunlight kills all germs, and all this company had to do was be upfront with everyone from the beginning. Not telling us what we all wanted to know. But what we needed to know. Apple could have broken new ground on this front, ignited a new realm of transparency. Instead, it chose a different path. And shareholders, fans, and the Apple community are paying the price.

That's too bad. I truly hope that Jobs comes back when he says he will, in June. But realistically, even though he says otherwise, I'm not banking on it.