An investor who fell asleep the day before Barack Obama's inauguration and woke up Monday might think very little had happened in the stock market since the new president took office. 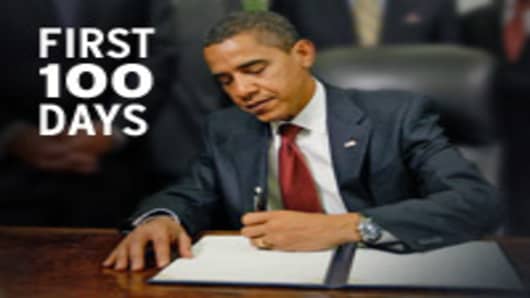 Major stock averages aren't far from where they traded on Jan. 19. Gold and oil prices are up a bit but essentially moving in a fairly narrow range, while an aggressive safety bid for Treasurys has abated and government bonds have settled as well.

But it's what has happened in between that has been remarkable, even if the overall effect doesn't seem that dramatic.

Stocks bottomed in early March following a disastrous bank-rescue presentation by Treasury Secretary Timothy Geithner. Whispers on Wall Street about the administration's plan to bail out the ailing financial sector caused wild vacillations in trading. Questions persisted about the viability of major automakers as well as some large banks.

Yet when all the dust cleared, Wall Street remained essentially where it was when this history-making president entered office: Chronically unsure about the nation's investing climate.

"Wall Street continues to be in a position where they're feeling out this administration and don't quite trust him yet," says Jordan Kimmel, fund manager at Magnet Investing in Randolph, NJ.

Reflecting the concerns about investors who want the market to stabilize but are uncertain about how much Obama cares about investors, Kimmel adds: "As far as I'm concerned I hope things work out well enough that they give him a third term. But I still wouldn't give him credit."

For Kimmel and others who think the administration doesn't connect the fortunes of Wall Street to Main Street closely enough, Obama remains a cipher who nonetheless could benefit from the timing of taking office right around the time the worst of the recession has passed. The effect would be similar to when Bill Clinton took over for George H.W. Bush 16 years ago.

The public remains divided over the administration as well, giving Obama strong personal approval ratings that are nonetheless about in line historically with other new presidents, but expressing worry about his policies.

In the investment community, the sentiment is about the same, though the recent performance of the market and the administration's plans to rescue the banking system have salved some of his critics.

"For the first 100 days you have to give him a solid B-plus or A-minus because he's addressed some of the major concerns," says Tom Lydon, president of Global Trends Investment in Newport Beach, Calif. "In general, as far as confidence in the market, the confidence of the average investor, they're giving Obama and his team the thumbs-up."

At the onset of Obama's administration it appeared that investors were going to sell and keep selling as sentiment pervaded that the White House was without a serious plan to solve the financial crisis.

When Geithner spoke to Congress on Feb. 10 to outline the administration's plan to tackle the toxic assets that were choking bank balance sheets, the vagueness of the proposal sent Wall Street howling.

The market fell nearly 5 percent that day and the catcalls grew for Geithner's ouster. Stocks continued to plummet, with the Dow sagging to 6469.95 on March 6--a level that some analysts are now calling the makings of a long-term bottom.

The turning point appeared to be a 180-degree spin by the administration in the form of a much clearer public-private toxic debt plan partnership in late March that has led to a widely held belief that the problem is under control, at least for the near term.

"Considering where the market started and where the market was looking at from the day that Geithner stood up and presented the (first) bank bailout plan, he's made a quantum leap since then," says Matthew Tuttle, president of Tuttle Wealth Management in Stamford, Conn. "I think we have gotten to the point where there's some confidence."

Indeed, if financial stocks were the sole barometer by which to judge the administration, then Obama has been a huge success. The industry's biggest names have been the best performing stocks on both the Dow and the Standard & Poor's 500 in terms of percentage gains, even as the indexes themselves have reflected a 3.5 percent drop for the Dow and a 1.1 percent gain for the S&P.

JPMorgan Chase has soared 84.5 percent since Obama's inauguration to lead Dow components. XL Capital is up 211 percent to pace the S&P, while State Street has risen 149.7 percent and eTrade is up 145.5 percent.

Yet many analysts think financials will merely be a participant in the next bull market and not its leader, and encourage Obama to make sure other parts of his agenda don't suffer at the expense of banks.

"The next bull market is going to be alternative energy, infrastructure and biotech," says Michael Cohn, chief investment strategist at Atlantis Asset Management in New York. "We need to kind of get that going and spend money on that."

Advice For a Rough Road Ahead

As Cohn's statement reflects, there's no shortage of advice in the marketplace for the administration, especially since the market has recovered off its March lows.

The prevailing sentiment: Don't screw it up.

Cohn represents a tepid middle ground of market sentiment, with statements like, "I don't perceive the new administration to be investor unfriendly."

Beneath that thought is worry that Obama will go too far in emulating FDR's New Deal template and send the market into another tizzy similar to the 1937 swoon in the economy that came just as many thought the Great Depression had ended.

"They tried to balance the budget in 1937 and they raised taxes, which basically sent the market into a massive tailspin and prolonged the Depression for another couple of years," Cohn says. "They're deathly afraid of that result from Obama, which while it seems fiscally prudent it's not from an investment standpoint and from an economic standpoint."

One thing the administration could do to boost market confidence would be to start taking a little lower profile.

"If I were him right now I'd be careful. I think the answer about whether this is a bear market rally or is part of a bull market could hinge on what the government does and doesn't do," Tuttle says.

And there's plenty to mess up.

For while the banking picture may be getting clearer, consumers remain under tremendous pressure as unemployment rises, housing continues to languish and the economy contracts.

In fact, some of the market's biggest consumer staples companies--Procter & Gamble and Kraft Foods to name two--have been Wall Street's biggest losers since the Obama era began. The companies have lost 14 and 21 percent respectively and reflect a throbbing unease by average Americans who've gotten rocked by the financial system's failure.

That lack of confidence is rarely positive for investors.

"They keep using the word 'crisis,'" Magnet Investment's Kimmel notes. "It's a standard political ploy to mean we need to help you because you can't help yourself. It's a story of big government that's never really friendly towards Wall Street."

The upshot seems to be that the administration, despite its recent successes, has still failed to bring everyone on Wall Street along for the ride.

Restoring confidence, then, will be the big challenge going forward.

"The big billion-dollar money guys have all reined in their horns and don't believe that we're coming out of this anytime soon," Cohn says. "You want to bring these guys back into the market, because that's what's going to make this thing go up and the world to be all right again."