General Motors has reached a preliminary agreement for the sale of its Hummer brand of large sport utility vehicles and pickup trucks to a machinery company in western China with ambitions to become a carmaker, a person familiar with the Chinese government approval process said Tuesday. 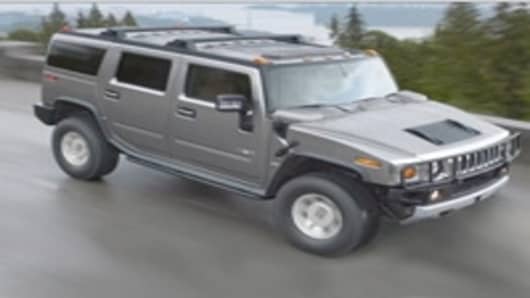 The Sichuan Tengzhong Heavy Industrial Machinery Company Ltd., based in Chengdu, concluded the agreement with GM , said the person, who insisted on anonymity.

Sichuan Tengzhong is a privately owned company, but Tuesday’s deal required preliminary vetting by Beijing officials, who retain the right to veto any attempt at an overseas acquisition by a Chinese company and who give special attention to deals over $100 million.

G.M. announced the deal early Tuesday morning in Detroit but said that the memorandum of understanding would not allow it to reveal the buyer or the price. Industry analysts have estimated that the Hummer division would sell for less than $500 million.

Sichuan Tengzhong is known in China for making a wide range of road equipment, from bridge piers to highway construction and maintenance machinery. But even before the Hummer deal, the company has been moving more into heavy-duty trucks, including tow trucks and oil tankers.

Sichuan Tengzhong’s offices were closed on Tuesday evening and calls to its headquarters were not answered.

“Overall, we’re pretty pleased,” said a spokesman for Hummer, Nick Richards, without identifying the buyer. “If you think about the qualities we’d want in a new owner for the brand, this buyer really met all the criteria. They’ve got a proven track record in international business, and they’ve got a long-term vision for the brand. They’ve got the capital to invest in more efficient vehicles, which is what’s necessary to grow the brand.”

If the purchase is completed, it would mark the first acquisition of a well-known American automotive brand by a Chinese company, after many months of speculation about when this might occur. Chinese automakers have already purchased the MG and Rover brands, two of the most famous names in British automotive history.

As a Chinese company, Sichuan Tengzhong could face a challenge in presenting the deal to American owners of Hummer. The brand has long sought to emphasize patriotism, stressing that the Hummer H1 was essentially the same vehicle built in the same factory as the Humvee that carries American soldiers into battle in Iraq and elsewhere.

It was Governor Arnold Schwarzenegger of California who persuaded the longtime maker of Humvees, A.M. General in Mishawaka, Ind., to build a civilian version. As he recounted at a Hummer news conference in 2001, Mr. Schwarzenegger was filming the movie “Kindergarten Kop” in Oregon in 1990 when he saw a convoy of 50 Humvees drive by and decided that he had to have a civilian model of the same vehicle, which became the Hummer H1.

G.M. bought the rights to the Hummer brand in 1999 and began making somewhat smaller Hummers. G.M. initially procured the H1 from A.M. General but discontinued the model in 2006.

Under the preliminary agreement announced on Tuesday, GM will initially continue to manufacture Hummers under contract for Sichuan Tengzhong, which will then market them around the world. G.M. will continue making the H3 and H3T models in Shreveport, La., through the end of next year, for example.

The buyer plans to shift additional production of the H3 from a plant in South Africa to Shreveport, Mr. Richards said.

Sichuan Tengzhong could bring Hummers to the crowded streets of China’s big cities, although the vehicles would face the 40 percent tax that China imposes on cars, S.U.V.s and minivans with engines over 4 liters.

G.M. has not set up its own Hummer dealer network in China, but entrepreneurs already import the vehicles and sell them in the biggest cities.

Copies of the Hummer by Chinese automakers draw crowds at auto shows, although they are labeled as concept vehicles and are not for sale.

G.M., which is hoping to shed unwanted assets and emerge from bankruptcy in about two months, said it expected the deal to close in the third quarter. The automaker had planned to close Hummer if a buyer could not be found. It is also trying to sell Saturn and Saab this year and plans to eliminate a fourth brand, Pontiac, in 2010.

“Hummer is a strong brand,” Troy Clarke, the president of G.M. North America, said in a statement: “I’m confident that Hummer will thrive globally under its new ownership. And for G.M., this sale continues to accelerate the reinvention of G.M. into a leaner, more focused, and more cost-competitive automaker.”

Once considered the ultimate muscle car, the Hummer became a symbol of what was wrong with G.M. and the American auto industry — big, bulky and gas-guzzling. Sales of Hummers fell 51 percent last year, the worst drop in the industry, and are down 67 percent so far in 2009.

In February, G.M. said it had three bidders for Hummer, which has about 220 dealers globally.

Hummer’s chief executive, James Taylor, said the sale would allow the company to continue to grow and maximize the brand’s potential.