It sounds too good to be true: For just $10, you can become the owner of a $3 million mansion. 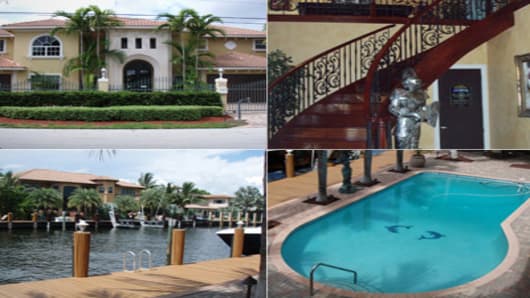 You won’t be automatically subscribed to 3 million magazines.

And you don't have to sign over the rights to your first-born.

The owners, Miles and Laura Brannan, both work in real estate in south Florida. (And you know how that turned out.) The house has been on the market since August 2008. There have been three offers since then, but guess what? None of them could get financing! So, the owner decided to get creative and hold a raffle for the house.

They’re selling 300,000 tickets at $10 each. The winner will be announced when all the tickets have sold or on Dec. 25 at 7pm, whichever comes first.

The legal roundabout of it all is that the Brannans will use the $3 million to pay off their mortgage, then give the rest of the proceeds to their church. The church will technically own the house during the transaction, then turn it over to the new owner.

This could wind up on the next Judge Judy but hopefully given all the good samaritanism going on, it will be a smooth transaction and one lucky winner will get their ticket to paradise for $10.

Oh, a coupla things about paradise:

1) The house is in Fort Lauderdale — plan accordingly.

2) The annual property taxes are $34,000, though the owners say they’ll pay them for the first year.

And, actually, $34,000 would be the least of your problems. Don't be surprised if you get reassessed at a much higher tax rate in the next few years.

Plus, the IRS considers that $3 million asset you just earned income, so there's the little issue of income tax, which could be more than 30 percent. On $3 million? That's a cool million-plus.

"I think the winner has some real tax issues," said Ira L. Zuckerman, a tax attorney in Hollywood, Florida.

Oh, and if you're planning on selling it? There's a capital-gains tax on that, Zuckerman points out. And let's see, you paid $10 for a $3 million asset? Yeah, that's going to be a hefty capital-gains tax.

But don't worry about that yet because ...

3) You're going to be there a while. Analysts peg South Florida as among the last real estate markets to recover, mostly due to the … how shall we say … charming colloquialisms of the state legislature.

You'll only get to pay that capital-gains tax if you're lucky enough to find a buyer for your little piece of South Florida paradise.

"If you don't have the cash and you can't afford to pay the real-estate taxes on a place that fancy in this marketplace — I hope you don't win!"

OK, if you’re still in, you can buy your tickets online at Floridaluxuryauctions.com or by phone at 1-888-71-TICKETS, and you don’t need to be present to win.

(Oh, and a million dollars for Uncle Sam!)